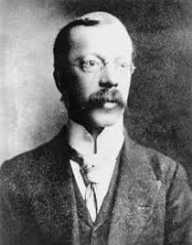 Hawley Harvey Crippen was born to Myron Crippen and Andresse Skinner on September 11, 1862, in Coldwater, Michigan. The family were well-off and ran their own business, a dry goods store.

Hawley Harvey Crippen graduated from the University of Michigan and then did a medical degree at the Homeopathic Hospital in Cleveland.

After graduation, Hawley Harvey Crippen moved to New York City. He met and married an Irish woman Charlotte Bell and they had one child, a son Otto. After Bell died suddenly in January 1892 from apoplexy, he sent his son to his parents who were living in California. In September 1892, he remarried a woman called Cora Turner. Turner was a young actress and opera singer, aged 19 when they married. She was born in Brooklyn into a European family, and her real name was Kunigunde Mackamotzki. She also had a stage name, Belle Elmore.

During the early years of their marriage, the Great Depression occurred and they had financial difficulties as interest in homeopathy was decreasing, and Turner had to abandon her acting classes. Hawley Harvey Crippen took a job with a mail order business, Munyon’s Homeopathic Remedies. After becoming a state area general manager, he was sent to open the company’s office in London, England. Turner later joined him and tried pursuing an acting career in London, but it did not go well. In 1899 he was fired from his job, and he was forced to look for other work.

In 1901, Hawley Harvey Crippen met a young woman Ethel Le Neve who was working as a secretary at a homeopathic clinic where he had found work, and they fell in love. He was doing well at his new job, and he moved with his wife to a new house at Hilldrop Crescent where Turner decided to take in lodgers. Turner became involved with one of their lodgers, a young student, and Hawley Harvey Crippen became aware of it. The couple lived in a toxic atmosphere until in 1909 he decided to murder his wife. In early 1910, he obtained five grains of the poison hydrobromide of hyoscine from a chemist.

He was arrested and put on trial but always denied that he had murdered Turner. The sequence of events was that the drug he had obtained to subdue Turner had the opposite effect and made her hyperactive, there was a brawl which ended in Hawley Harvey Crippen shooting her. He dissected Turner’s corpse, burnt her bones in their kitchen hearth and buried her torso in the house. Afterwards, he disposed of her head and organs by throwing them in a sack into a canal close to their home.

He was interviewed by police who believed his story. Unaware of this, he panicked and fled to Canada with his girlfriend. When the Scotland Yard detective Drew paid a follow-up visit and discovered Hawley Harvey Crippen missing, they became suspicious and opened an investigation, had the house searched and found the remains of Turner.

Hawley Harvey Crippen and his girlfriend had by then boarded the Montrose to Canada. The Captain of the ship saw pictures of the couple in a newspaper telegraphed by White Star Line in Liverpool, and Inspector Dew of Scotland Yard was informed, and the couple was arrested as they were about to disembark in Canada.

Hawley Harvey Crippen was found guilty on the 26 October 1910 and executed by hanging on the 23 November 1910. He left his estate to Ethel who, after spending five years in Canada, returned to the UK, married and died at the age of 84 in 1967.

The house where the murder took place, 39 Hilldrop Crescent, stood empty for thirty years and was destroyed in World War II in an air raid.

The Crippen family were strict Protestants.