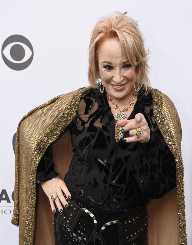 Tanya Tucker is an American country music singer born on October 10th, 1958. She is famous for her first hit single was “Delta Dawn.” She was only thirteen years old when she released the song. Since then, she has grown in her career to become one of the music legends recognized worldwide. Throughout her career, she has garnered several Country Music Association nominations and awards.

In 2002, the country singer established Tuckertime Records, her own record label. She collaborated with Glen Campbell on many of her records. In fact, she dated him briefly between 1980 and 1981.

Tanya Tucker was on October 10th, 1958. Her place of birth is in Seminole, Texas in the United States. She was the last born child of Juanita Tucker and Jesse. La Costa is her sister, and she has two brothers Robert and Don who sadly died of pneumonia. The nature of her father’s work forced their family to move from place to place frequently. He earned a living as a heavy equipment operator. However, most of her childhood was spent in Willcox, Arizona before moving to St. George, Utah.

In 1972, Tanya Tucker released her debut album titled Delta Dawn. The album was of great success for it was ranked on the country charts’ No. 6. The following year, she released her hit single "What's Your Mama's Name.” She appeared in Rolling Stone magazine when she was 15.

In 1975, Tanya Tucker released another album titled Tanya Tucker. Later in 1977, Ridin' Rainbows followed. The following year her gold-certified album TNT was out.

Besides music, Tanya Tucker has also had roles to play in the film industry.  In 1980, she was the lead character of flick Follow That Car. The following year she co-starred in the movie Hard Country.  The TV series, Tuckerville is Tucker’s reality series. The series aired from 2005 to 2006 on The Learning Channel. Tucker starred in the series alongside her children.

In the 1980s, Tanya Tucker continued releasing hit music including Changes in 1983. Later in 1986, she released another successful album titled Girls Like Me.

In 1991, she released What Do I Do with Me followed by Can't Run from Yourself the following year. Later in 1997, her album Complicated was out.

Tanya Tucker went ahead to record the album Tanya on Tuckertime, her label. This was after she left Capitol Records. Subsequently, she released two more albums and another in 2009 titled My Turn.

Throughout her life, Tanya Tucker has been in a relationship with many entertainers including Glen Campbell. The two dated for a year, beginning in 1980 and ended in 1981. Also, she has been involved with Don Johnson, Merle Haggard, and Andy Gibb.

Tanya Tucker later dated actor Ben Reed. This relationship bore fruits with the birth of a baby girl Presley Tanita in 1989 and a boy Beau in 1991. The couple then got engaged in both in 1997 and engaged to wed in 1999.  However, Tanya Tucker had to put off the wedding after she realized that she was pregnant. In June of the same year, their daughter Layla LaCosta was born.