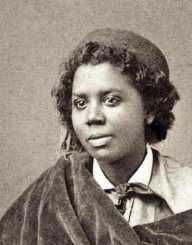 Mary Edmonia Lewis was born on July 4th, 1844. She was an American sculptor who hailed as the first African-American woman to receive accolades in the field of arts. Her prominence came as a result of bringing together artistic themes associated with black people in the 19th century. Also, her exceptional work saw her name included in the list of 100 Greatest African Americans by MolefiKete Asante.

Mary Edmonia Lewis was born on July 4th, 1844. She was the daughter of an Afro-Haitian father and an African-American mother. Lewis’ father worked as a servant while her mother was a craftswoman and a weaver.

Orphaned at a tender age of nine, Lewis, together with her older half-brother were forced to live with their aunt near Niagara Falls. Here, she took part in selling baskets alongside other items including blouses and moccasins.

Lewis first joined Oberlin College at the age of 15 where she began to study art. She stood out as one of the few students of color and this as she claimed, subjected her to discrimination and racism. Despite studying up to her final year, Lewis did not graduate because of some challenges. Consequently, she had to leave school.

In 1864, Lewis began to pursue her sculpting career in Boston. She received help from abolitionist William Garrison who introduced her to practicing sculptors. In turn, Lewis got hands-on experience on ways of mastering the art. From here she progressed and later set up her studio.

The most notable sculpting piece that earned her fame was that of Colonel Robert Shaw. Lewis gained quite a fortune from the art. She later moved to Rome where she joined several American artists including women.

While in Italy Lewis continued with her artwork and in 1867, she produced “Forever Free.” The artwork indicated a black man and woman breaking out of slavery. She went on to produce more prized pieces including “The Arrow Maker” (1866) and “The Death of Cleopatra” (1876). The sculpture of the Egyptian Queen Cleopatra also earned her quite an important public salute. Lewis then worked on carvings of American presidents including Abraham Lincoln and Ulysses S. Grant.

Lewis had no known marriage engagement or children.