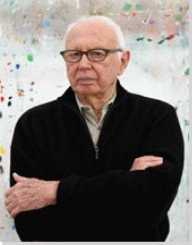 Ellsworth Kelly was born on May 31st, in 1923. He earned his fame for being a talented sculptor, painter, and a printmaker. Through his artistic works, he demonstrated techniques that emphasized color, form, and line.

Ellsworth Kelly was born on May 31st, in 1923. His place of birth was in Newburg, New York. He was the second born son to Florence Rose Elizabeth and Allan Howe Kelly. His father worked in the insurance industry. On the other hand, his mother was a schoolteacher. At some point, his family migrated and went to live in Oradell, New Jersey. It is here that his grandmother gave him lessons on ornithology.

Kelly began his early education in a public school. While studying here, he continued to hone his artistic skills. Around this period, his parents were not in for the idea that Kelly should pursue art in his career. Nonetheless, his school teacher strongly encouraged him. Later on, Kelly went to Pratt Institute situated in Brooklyn. In 1943, he was joined the army.

For a period of about one year beginning in 1946, Kelly moved to Boston where he studied in the School of the Museum of Fine Arts. Around this time, he also taught art in Roxbury. Afterward, he migrated to Paris where he crossed paths with the likes of Merce Cunningham and John Cage.

In 1954, Kelly made his return to America following an unsuccessful spell while living abroad. He continued focusing on his art and in 1956, he had his first ever exhibition hosted at Betty Parsons’ gallery. He hosted another exhibition the following year in the same gallery. Some of his artworks including Bar, Atlantic, and Painting in Three Panels were chosen to be showcased at the Whitney Museum of American Art.

Ellsworth Kelly passed away on December 27th, in 2015. He was 92 years old at the time of his demise.