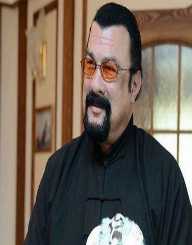 Steven Seagal is a well known American actor as well as a 7th-dan black belt in Aikido. He was an Aikido instructor in Japan before he traveled down to Los Angeles, California. It was in California that he got offered his first movie, Above the Law. He later went ahead in appearing in some films including Under the Siege and On Deadly Ground. Although he did not have instant commercial success in Hollywood, his martial art made him earn a mark in the film industry. His skill was used in martial arts film.

Steven Seagal later went ahead in featuring in low-budget films before he returned to the big screen. Apart from being an actor, he is a reserve deputy sheriff. He, however, ventured into his business after taking a break from acting. He called his business Seagal Enterprises and had a reality show of his own. Currently, he is an environmentalist and an animal right activist.

Steven Seaga was born to Samuel Steven and Patricia on April 10, 1952, in Lansing Michigan. His mother was a medical technician while his father was a teacher. He is of Jewish-Irish origin. He had studied at Buena Park High School before he got a job as a dishwasher in a restaurant, The Wagon Wheel. He was extremely swift on his feet that the cook decided to teach him karate having studied and observed him for some time. It was during that period he learned aikido under Harry Kiyoshi in 1964. He later moved to Japan with his father who was then visiting the country for military reasons. He later earned his 7th dan degree and Shihan in Aikido. He became the first foreigner to operate an aikido dojo.

His first connection with Hollywood was the film; The Challenge was released in 1982. Steven Seaga happened to be the martial arts coordinator for the film. Later on, he became the head of Tenshin Aikido in Osaka and had to move to the US in 1983. He opened an aikido dojo in the North Hollywood around that year and worked as a martial arts coordinator for the film, Never Say Never Again. He was later approached to write and coordinate the martial arts sequences for Above the Law in 1988. Steven Seaga was also cast in the film and later seen in two other films, Hard to Kill and Marked for Death two years later. These two films got him the national fame he wanted. He, however, got his proper breakthrough in 1992, Under Siege and the sequence, Under Siege 2: Dark Territory. These works were very successful and one of his most successful films. Later on, he starred in the Glimmer Man and Executive Decision.

Steven Seaga later played in an environmental friendly movie, Fire Down Below in 1997 as an EPA agent fighting moguls discarding toxic waste. This work failed to perform well at the box office. Thus, his contract with Warner Bros went down with the movie. He later starred in different movies for some years. Apart from martial art and acting, he is also a good guitarist. Steven Seaga released his debut album, Songs from the Crystal Cave in 2005 and later on released Into The Sun which featured some tracks. He spent years touring the US and Europe with his band to support his albums. He also worked as a Reserve Deputy Chief in the Jefferson Parish, and he decided to work on the shooting for his show, Steven Seagal: Lawman who was premiered in 2009. He later returned to mainstream Hollywood after some years with the 2010 movie, Machete.

One of his best movies is Under Siege which he did in 1992. The movie was one of his most successful films up to date. The movie was known to have grossed over 156 million dollars at the box office. It, however, became more successful with its sequel in 2001.

Steven Seaga was conferred in 1999, a PETA Humanitarian Award

Steven Seaga married in 1974, Miyako Fujitani. The couple had two children who become very popular in their extreme fields. He however left in 1987. He, however, married Adrienne La Russa before his divorce with Fujian. Sooner, he fell in love with Kelly LeBrock with whom he had a child with. Upon hearing this, Russa annulled the marriage.  In 1991, he was accused of sexually harassing some ladies and got divorced in 1994 by LeBrock for his irreconcilable differences. Seagal is a Buddhist and currently married to Erdenetuya Batsukh.