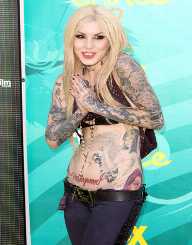 Katherine von Drachenberg was born on March 8th, in 1982 in Montemorelos, Mexico. She is famous for being a tattoo artist. Aside from this profession, she is also a musician and an entrepreneur. Her career has become successful more so in the TV industry. One of the TV shows that transformed her career was the LA Ink, a TLC reality television show. This show was aired for four seasons from 2007 to 2011.

Kat Von D’s real name is Katherine von Drachenberg. She was born on March 8th, 1982 in Montemorelos, Mexico. She is the daughter of Seventh Day Adventist parents called René and Sylvia. Kat Von D has two other siblings, a brother named Michael and her sister Karoline. When she was four years old, their family migrated and settled in Los Angeles where she would later grow up into a talented star. At the age of 6, she took piano lessons. Clara von Drachenberg, her grandmother, motivated her into pursuing music as her main career. It is also through her grandmother’s love for art that Kat Von D realized her inner passion for art. From here, she developed a special interest in tattoos. At the age of 14 years, she got her first tattoo. This tattoo was drawn on her ankle.

Taking the high road, Kat Von D dropped out of school two years after getting her first tattoo. She intended to take tattooing as her career path and sooner or later she got employed at one of the professional tattooing shops called Sin City Tattoo. In a few years, she honed her skills by working on other shops including Inflictions and Blue Bird Tattoo. Shortly after, she found herself working at True Tattoo. Here, she worked alongside other tattoo artists such as Chris Garver, Clay Decker, and Tim Hendricks. These individuals motivated Kat Von D to try featuring in the TLC reality show called Miami Ink. Fortunately, there was an opening as Darren Brass was not in a position to draw following an accident that broke his elbow. Kat Von D featured in the reality show for two seasons before leaving.

With the money Kat Von D had gained from the TV show, she managed to open up her tattoo shop and named it High Voltage Tattoo. From this, she was in a better position to air her reality show on the TLC channel. This show was called LA Ink. During one of the shows, she got herself a spot at the Guinness World Record for drawing the highest number of tattoos in only 24hrs. This was in 2007 where she drew 400 tattoos with the period of 24hrs. A year later, Oliver Peck, who was her husband then, broke the record after hitting 415 tattoos. LA Ink brought numerous followers to Kat Von D’s career as it was aired for four seasons before being terminated in 2011. She went public with the announcement that she was stopping the show for the mere reason that she was not willing to continue airing LA Ink.
In 2009, Kat Von D released her book High Voltage Tattoo. The book performed well in the market as it was ranked number 6 on the The New York Times list of best sellers that year.

In 2003, Kat Von D got married for the first time to a fellow tattooist called Oliver Peck. The pair divorced in 2007. During the same year, she announced that she was saying goodbye to her drinking behavior claiming that it was a major hindrance to her career. In early 2008, she began dating Nikki Sixx after which she also dated Jesse James. In 2012, she also entered into a relationship with Deadmau5. The relationship did not last long as they only dated for months before breaking up in November that year.