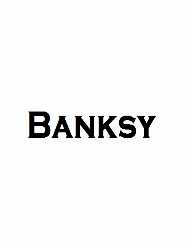 Banksy is one of the modern street artists that their real name remains unknown and eludes so many. Moreover, this is one of the strange facts that has helped boost his fame in the art world. Also, the street artist is one of the English marvels of our time. Also, the artist uses paintings to advocate politically. However, some see the work of the artist as vandalism. The work of the artist contains a lot of dark humor. Also, the work has one of a kind style that has drawn in the attention of many people. If you have a keen eye, then throughout England, you will notice some political and socially, motivated graffiti. Banksy ones said that his work came from the inspiration of 3D, another graffiti artist.

Most of his work, Banksy depicts them on open spaces such as walls. Moreover, he stopped the selling of his work sometime back. However, some of his public paintings are still on sale. The sellers even sometimes remove the walls on which they are on. Furthermore, In the year 2010, Banksy work inspired the production of a documentary to honor his work. The film got a lot of attention reeling in an Academy Award Nomination. Also, the artist himself got an award for being the Person of the Year in 2014.

It is true that the integrity of Banksy is still not a piece of public knowledge. Therefore, there has been a lot of speculation as to who the artist is. The only thing that seems apparent is the gender of the artist Banksy. The predictions paint the artist as white and around the age of 28 years or above. They say that his work in the British underground began when he was only 14 years of age. Also, during the stated time he got expelled from school.

Later, Banksy got to serve a prison sentence for petty crimes. Banksy prefers to remain anonymous due to his illegal works. Furthermore, many people believe that Banksy is Robin Cunningham. Robin was born in the year 1973, on July 28th.  Many of the people that he grew up with have corroborated the story. Also, sometimes when in New York, Banksy registered himself in at a Hotel under the name Robin. Apart from these speculator stories, there have been many others. However, this one is the one that seems to resonate with the people more.

The work of Banksy began to make an appearance in the early 1990s in Bristol. The artwork made its cameos through the aid of the graffiti gang DryBreadz Crew. Most of his early works were done through freehand. Later in life, he started using stencils to perfect his work. After realizing that the stencils were better, he switched and used them permanently. Therefore, Banksy’s work began to pick up fame in Bristol and London. He would leave his signature on many of his work.

What are his Best Methods of Painting?

Banksy does his work by characterizing striking images also that have slogans on them. Most of the paintings are politically motivated. On the other hand, they have the norm of talking against this like capitalism, greed, war, and hypocrisy. He also finds time to dwell on the subjects like the royal family, children, law enforcement officers, apes, and even rats. Banksy, ones did a painting on an elephant that brought a lot of controversies on the subject. Many of the animal rights activists were not happy.

The Art on the West Bank

Among the many paintings that have been on people’s tongues was the one don on the West Bank. The picture gave a depiction of Israel and Palestine. The art went on to draw a lot of media attention in the year 2005.

After some time in the media, Banksy drew in a lot of fame. Also, the fact that he has refused to come out and claim all of his work publically as helped. This then has brought a lot of attention to the selling of his artwork. Therefore, the artwork that is selling so fast has caused what journalist Max Foster would later refer to as the Banksy effect. Also, the release of the famous documentary drove his fame through the roof. Besides the literature got a nomination for an Academy Award. In the year 2013, Banksy went to New York City. While there, he said that he would create new art on the streets every day. Also, during the same period, Banksy sold most of his work on the road of New York City for a low price.