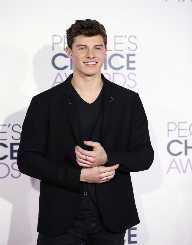 Shawn Peter Raul Mendes was born on 8th August 1998 to Manuel and Karen Mendes. Mendes’ father has his own business selling supplies to restaurants and bars in Canada. His mother is a real estate agent.

Shawn Mendes is the eldest of two children, with a younger sister named Aaliyah. Aaliyah has also had success with singing. Mendes attended and completed his secondary education at Pine Ridge Secondary School in Ontario.

Shawn Mendes began his career with a YouTube channel in 2011, which quickly gained popularity. His debut single, “Life of the Party” was released in June 2014. The single made it into the Top 25 of the Billboard Hot 100, making Mendes the youngest star ever to accomplish the feat.

In 2014 he was signed to Island Records. This was followed by his self-titled EP which was released on iTunes in July 2014 and went straight to number one in only 40 minutes.

Mendes then released his second album titled “Handwritten” in early 2015. This album went straight to the top of the Billboard 200 and sold over 100,000 copies in the week of release. His single from the album, “Stitches” made it to number four on the Billboard Hot 100. He also gained popularity in the UK through his single.

Shawn Mendes has jump-started his career by collaborating with two other artists, widening his exposure dramatically. The first artist was Austin Mahone in 2014. Mahone was also a young, upcoming artist as was Mendes. The two of them did a tour of the States which quickly cemented their popularity with the younger generation who identified with them.

Mendes’ second collaboration was with Camila Cabello in late 2015. The two made a single together, “I Know What You Did Last Summer.” In 2016, Mendes went on to release his next album “Illuminate,” along with his single from the album, “Treat You Better.”

During this period, Shawn Mendes did a tour of Europe, which helped him gain even more popular among the younger generation. In 2016, Mendes also signed with Wilhelmina Models to launch his modeling career.

Although as young as he is, Shawn Mendes recognizes the importance of legacy and helping others. He launched a campaign with dosomething.org in 2014 called “Notes from Shawn.” The campaign was to help with raising awareness for those with depression and low self-esteem. They relaunched a similar campaign in 2015.

Mendes has also raised $25,000 in conjunction with Pencils of Promise which went towards building a school in Ghana. It’s inspiring to see one so young already doing significant work with charities.

It is easy to see the talent Shawn Mendes has. He is self-taught on the guitar. He learned by watching tutorials on YouTube. He also writes his music, which would indicate there will be many years of music to come.