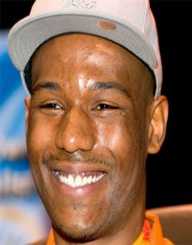 Shani Earl Davis is a phenomenal American speed skater and an Olympic gold medallist. Born on August 13, 1982, he has nine world records to his credit. Davis won gold in speed skating 1000-meter event at the 2006 Winter Olympics Games becoming the first black athlete to achieve that feat at an individual level. Also, he won a silver medal in the 1500 meters.

He successfully defended his gold and silver medal at the 2010 Winter Olympics in Vancouver, Canada, hence the first person to defend the 1000 and 1500-meter speed skating at the event.

Shani Earl Davis was born on August 13, 1982, in Chicago, Illinois. He was born to Cherie Davies and Reginald Shuck. His mother worked for a local lawyer who was also a speed skating official. At age six, Davis entered the Robert Crown Centre in Evanston on the suggestion of the lawyer.

Cherie did all it takes to ensure Davis skating potentials improved by day. In addition to ensuring his consistent training, she also moved the family to Evanston. The move was to ensure proximity to the skating club.

At the age of 16, Shani Davis entered a development program for young speed skaters in Lake Placid, New York. Aiming high and having Olympics ambitions, he moved to Marquette, Michigan, for his training.

Prolific as he was, he became the first American skater to make the long and short track teams at the Junior World Teams, in 2000. He repeated this feat in 2001 and 2002.

In December 2001, Shani Davis surprisingly earned a spot for the 2002 Winter Olympics short track team. He beat teammates Rusty Smith and Apolo Ohno in the 1000m race to win a place. He since became the first black American skater to get a spot on the team. However, the victory resulted in several controversies, with suggestions that Smith and Ohno were not competitive enough.

The two had already earned their slots in the team due to points accumulated earlier. One of the contenders Tommy O’Hare complained bitterly, and the issues ended up at the arbitration. Nonetheless, there was no proof of Smith and Ohno favoring Davis.

In addition to competing in the Winter Olympics, Davis also participated in the 2002 Junior World Championships and Junior Country March in Italy. He won the 1500m events at both competitions.

In 2003, Shani Davis moved from junior level to men speed skating. He went ahead to win the North American long track championship in February and defended it the following year. He then placed second in the 2004 World Allround Long Track Championships in Hamar, Norway.

At the 2006 Winter Olympics in Turin, Italy, Shani Davis won a gold medal in the 1000-meter event. This made him the first black athlete to achieve that feat at an individual level. He continued the impressive performance winning silver in 1500 meter. However, teammate Chad Hedrick criticized him for abandoning the US team to pursue individual laurels.

Also, the incident ruined Davis relationship with the U.S. Speedskating. After the Olympics, he won the World Allround Championships in Calgary setting a world with an all-round score of 145.742. He also broke the 1500-meter world record 1:42.68. He subsequently broke his record with 1:42.32. Davis competed in the 2010 Winter Olympics in Vancouver, Canada, and won gold in 1000 meters, becoming the first man to win gold medals back-to-back in the 1,000-meter at the Olympics. He also won silver in 1500 meter.

He has set several worlds records with 58 individual careers victories on the ISU Speed Skating World Cup circuit. He studied at the Northern Michigan University.