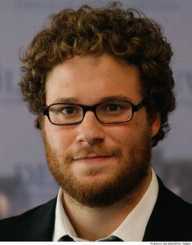 Seth Rogen is a Canadian- American actor, comedian, director, filmmaker, and screenwriter. He is best known for his comedy, which began from an early age, and many claims he is a born comedian. With all due respect, the majority of his fans find him extremely funny, right from his appearance even when he is not performing comic shows.

Seth realized he could make people laugh from his early days, and loved every bit of it. He did not shy away from pursuing a career in this. He rose to fame, and this opened doors for spots on television shows and acting career, rising to Hollywood.

Seth Rogen was born in 1982 in Vancouver, Canada. His parents were Mark Rogen and Sandy Belogus. Sandy was a social worker while Mark worked as an assistant director for the Workmen’s circle, a Jewish organization. The couple had one other kid, a daughter named Danya, who was older than Seth. Rogen’s education kicked off at Vancouver Talmud secondary school and later joined a grey secondary school for his high school education.

Seth portrayed his comic side right from these early days, performing stand up comedy at school and during camps. He knew he was talented at this, and wanted to pursue it as a career. At the age of 12, he joined a comedy workshop and would perform standup comedy at small parties and bars. He soon teamed up with a high school buddy Evan Goldberg, and they wrote funny jokes and polished scripts.

Seth’s parents were supportive of his ambitions, especially his mother, who frequently accompanied him to some of his stand up comedy gigs. With his humor and talent, it was just a matter of time before young Rogen received some recognition. At the age of 16, he won the Vancouver comedy contest.

Despite this, it turned out to be a challenging year for him. His parents lost their jobs, and their financial situation became extremely tight. Luckily, Seth Rogen’s career in comedy was picking up pretty well, as he got a job on a television show. His high school education was not favorable to his career pursuit, mainly due to the time factor. Because of this, Seth was forced to quit his high school education, working full time for Judd Apatow, the show’s owner. At this tender age, he became the breadwinner for his family.

Seth Rogen’s first acting career was in 1999 courtesy of Judd Apatow in series Freaks and Geeks. However, the show was not successful and had poor ratings, which led to its discontinuation after the first season. He worked closely with Apatow at the time, working on shows like Undeclared. He had writing ambitions and often thought himself as a better script writer than an actor.

At that time, Seth also part of the writing team for the show’s production. Apatow could face critics of why such a grown man as himself could hang out with a teenager. However, Seth saw the potential in him and often dismissed them, claimed he is the future of the comic scene. Apatow involved him fully in his work, often asking him and Goldberg to develop ideas for movies.

As he progressed, Seth Rogen worked in various shows as part of the writing team, for example, Da Ali G show. Due to their work, they received nominations for Primetime Emmy Awards. In 2005, he featured in a romantic comedy `The 40-year-old virgin’ which was a big hit. In the movie, he was an also the co-producer and modified his dialogue, making it even better.

However, the real breakthrough in Seth’s career came by in the year 2007, when he was given a lead role in a romantic comedy called Knocked up. It had favorable reviews for him and the movie as well, with huge profit margins. During the same year, he was part of the writing and production team for film `Superbad.’ Its script was based on his creativity from his early teenage days, with his friend Goldberg. In 2008, he featured in film `Pineapple Express.’ The film was also a masterpiece from his fruitful collaboration with teenage buddy Goldberg. The movie was also a good one and received helpful reviews.

Seth’s professional association with Apatow proved long-lasting and beneficial, and in the year 2009, he starred in movie `funny people,’ which is a comedy-drama movie. His performance was highly appreciated as usual by his loving fans. In 2011, Seth featured in the famous film the `Green Hornet.’ Despite having a lot of negative reviews, the film enjoyed a lot of success regarding profit margins.

Seth’s collaboration with Goldberg has been a real foundation for his career. In 2013, he co-directed with Goldberg in a film `This is the end,’ which was successful, in commercial terms and critic’s opinions. The next year, Seth was cast in comedy `Neighbors.’ During the same year, he co-wrote the controversial movie `The Interview’ that was briefly canceled. Seth other recent works include; Voice role in Kung Fu Panda 3, sausage party and the comedy before.

Partly due to personal reasons, Seth Rogen helps to create awareness about the Alzheimer’s disease and is very outspoken about it. Due to this, he founded Hilarity for charity movement. Its prime purpose was to create awareness of the disease. This led to him, and Miller was receiving an honorary award unite2gether courtesy of unite4: humanity. Seth is part of NORML and an openly known marijuana user.