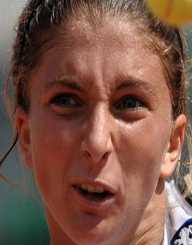 Sara Errani is an Italian professional tennis player. Her breakthrough came in 2012 when she made to the world top 10 for the first time in her career. During that year, she was number 7 in the singles and number 2 in the doubles.

Sara Errani was born on 29th April 1987 in Bologna, Italy. Her father Giorgio was a fruit and vegetable seller and her mother Fulvia was a pharmacist. Her father realized the talent of her daughter at a young age sending her to Nick Bollettieri Tennis Academy based in Florida in a bid sharpen her daughter’s game.

She later moved to Valencia at the age of 16, where she was under coaches David Andres and Pablo Lozano.

Sara Errani's first event was at Cagliari in 2002. Errani lost to Sun Tiantian. Her best performance that year was when she managed to reach the semifinals in completion in Zaton.

In 2005, her best performance in the circuit came in Spain when she won the tournament beating Lucia Jimenez in the finals.

On 27th July 2008, she took home her first WTA title in Palermo home Italy. She defeated Mariya Koryttseva in the finals. She went on to win several WTA titles.

Sara Errani is in a relationship with Gunnar Stansson.

Sara Errani's most significant breakthrough came in 2012. After a change in her training style, she won three singles which earned her $1.3 million cash prize.

In the Australia open during that year, she reached the quarterfinals of the grand slam. Her performance in the tournament improved her ranking to 33, her best.

Her performance continued to take an upward trend. In 2012 French Open, she managed to reach the finals in the tournament. Her consistency helped Errani achieve the best ranking of her career, number 10.

In the doubles Sara Errani together with her partner Roberta Vinci enjoyed immense success. They took home Australian Open trophy in 2012.