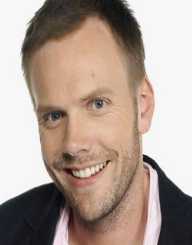 Joel McHale is an American actor, comedian, and television host. Born on November 20, 1971, he is also a television host and writer. Joel McHale who started a career by performing sketch comedy rose to fame as a host of E!’s The Soup and playing the role of Jeff Wenger in the NBC sitcom Community. He has appeared in several films including Spiderman 2, Spy Kids: All the Time in the World, 2011, Ted, 2012 and the short-lived CBS sitcom The Great Indoor among several others.

Joel McHale was born on November 20, 1971, in Rome, Italy to Laurie and Jack McHale. His father was at the time working as Dean of Students at Loyola University Rome Center. Raised in the Catholic faith, he grew up in Mercer Island, Washington, and Haddonfield, New Jersey. Joel McHale received education at Mercer Island High School. After graduating, he enrolled at University of Washington receiving a bachelor’s degree in History in 1995. He then enrolled in the University’s Professional Actors Training Program receiving a Master of Fine Arts degree.

Joel McHale joined the casts of the local sketch-comedy television show, Almost Live!, produced by Seattle’s King-TV. He was also a member of the improv comedy group at Unexpected Production from 1993 to 1997.

After graduating with his master’s degree in acting from the Washington University, Joel McHale decided to pursue an acting career. He then moved to Los Angeles where he earned minor roles in Diagnosis: Murder, CSI: Miami and Will & Grace. He also guest-starred on the NBC improve comedy show, Thank God You’re Here. McHale went on to play a minor role as Mr. Jacks, a bank manager in Spider-Man 2. He appeared in the sitcom Community, 2009 and the first episode of the fifth season of Tosh.0.

In 2012, Joel McHale played the role of Rex in Ted and continued with a guest role in the FX show Sons of Anarchy. He has appeared in several other television productions and films including Deliver Us From Evil and in three episodes of The X-File in 2016 and 2018. In 2016, he played the lead role in the CBS sitcom, The Great Indoors. He most recent role is as Chris in the Netflix series Santa Clarita Diet, 2018.

The Soup And other Shows

Joel McHale came to limelight as the host of The Soup on"E!" television network in 2004. The Soup was a satirical weekly show in which he took the audience through the oddities and ridiculous things that happened on television within the week. He was also a frequent co-host of Loveline and also a weekly guest on the shows The Adam Carolla Show and Micky and Amelia. McHale was on the American version of The IT Crowd and a judge on Iron Chef America. He was a visiting co-host of the ABC morning show Live! With Kelly alongside Kelly Ripa.

Aside from movie and comedy, Joel McHale is also a hosted several events including the White House Correspondents’ Association annual dinner in 2014. In 2011 he hosted the Independent Spirit Awards and the ESPY Awards in 2015. On January 18, 2017, he hosted the 43rd People’s Choice Awards and went on the host of the 2017 Webby Awards on May 15, 2017. Joel McHale announced in January 2018 that he would host his own talk show The Joel McHale Show with Joel McHale on Netflix. The show was made a debut on February 18, 2018.

Joe McHale is married to Sarah Williams since 1996. The couple has two sons Edward ("Eddie') and Isaac. They live in Hollywood Hills, California.

Who started a career by performing sketch comedy rose to fame as a host of E!’s The Soup and playing the role of Jeff Wenger in the NBC sitcom Community. He has appeared in several films including Spiderman 2, Spy Kids: All the Time in the World, 2011, Ted, 2012 and the short-lived CBS sitcom The Great Indoor among several others.