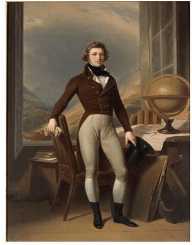 Louis Bonaparte was born on September 2, 1778, in Ajaccio, Corsica. His parents were Letizia Ramolino and Carlo Buonaparte. He had several siblings, one of which is the famous Napoleon Bonaparte. His other siblings were named Caroline, Elisa, Jerome, Joseph, Lucien, and Pauline. He later changed his name to Louis and changed the spelling of his last name to Bonaparte; this is the name that he is best known for now.

As a young adult, Louis Bonaparte attended a military school in France. Once he was done with his training here, he joined his brother’s Napoleon's army. In 1796, he campaigned in Italy and the next year he traveled to Egypt on another campaign.

In 1805, Louis Bonaparte was made the Governor of Paris. Later in the next year, Napoleon Bonaparte turned the Batavian Republic into the Kingdom of Holland. It was at this point that Napoleon made Louis the King of Holland, although Napoleon would still hold power over him. All in all, being the king held more or less the same amount of responsibilities as a Governor would.

Although Napoleon told Louis Bonaparte that he was the one in charge, Louis Bonaparte didn’t listen. As a king, he felt a duty to the Dutch people. He then learned Dutch and declared himself to be Dutch. He ruled in a way in which he felt helped the people of Holland, not in a way that helped Napoleon. Needless to say, Napoleon didn’t appreciate this.

Louis Bonaparte did his best to please the people of Holland, but forces outside of his control worked against him. An explosion in Leiden flood in another part of the country devastated the lands and the people in them. Louis Bonaparte provided what he could to those who suffered, but he could not reverse the effects of the natural disaster.

In 1910, Napoleon had enough with his brother disobeying him. He ordered him to abdicate the throne, but he refused. So, Napoleon invaded Holland in July. The invasion forced Louis to finally abdicated the throne, which made it easy for Napoleon to reconquer the country.

After leaving Holland, Louis Bonaparte traveled to Graz, which was in the Austrian Empire (which is now just Austria). He lived here for two years from 1811 to 1813. Here, he was safe from Napoleon, who he was still not on good terms with. Later, Louis Bonaparte moved to Rome, where he spent most of the rest of his life, writing poetry and reading.

Louis Bonaparte was forced to marry Hortense De Beauharnais, by his brother Napoleon. She was the daughter of Napoleon’s ex-wife. However, she was the product of a previous marriage, and they were in no way related. The marriage was not a happy one, and De Beauharnais was rumored to have been cheating on Bonaparte for most of the marriage. However, the couple did have three children (although it is not known if the children were really Bonaparte’s or not, even though he did claim them as his own): Napoleon Louis, Napoleon Charles, and Napoleon III. Once Louis was no longer under Napoleon’s control, he separated from his wife. He did not remarry. It is also rumored that he was gay, which could explain why he did not remarry. However, there is not proof of this.