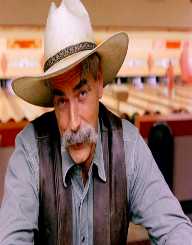 Sam Elliott was born on August 9th, in 1944 in Sacramento, California in the U.S. he is an American actor who earned his fame for playing leading roles in hit films such as Hulk and Ghost Rider. Before these films, he had gained early recognition in The Big Lebowski, Mask, and Gettysburg.

Samuel Pack Elliott was born on August 9th, 1944. His father was one of the workers at the Department of the Interior while his mother was a physical training professional. When Elliott was still young, one of his hobbies was watching movies. This influenced his early decision to take up acting as his main career. He was only nine years old when he made up his mind. His father thought that this was not the ideal profession that his son should undertake. Elliott and his father never got the chance to iron out their issues when his father was still alive. Elliott’s father passed away when his son was 18 years old. At this time, his father had the mentality that his son, Sam Elliott had picked the wrong career path.

Before featuring in films, Sam Elliott first appeared in some stage shows. During his first appearance in the movie industry, he also featured in voice acting. His debut film was in the 1969 Western film called Butch Cassidy and the Sundance Kid. In the 70s, he played the lead role in the TV series called Mission: Impossible. In addition to this TV role, he landed another crucial role in Once an Eagle during the mid-70s. Around this period, he also featured in a drama film called Lifeguard. In 1979, he was back on the TV career playing the role of Tell Sackett in The Sacketts.

Sam Elliott career turning point came in 1985 while playing the supporting role in the movie Mask-1985. After this hit film, he managed to feature as a guest in numerous shows such as Lancer, Gunsmoke, Hawaii Five-O and Felony Squad. Soon, Sam Elliott was not a new face in the film industry as he went on to feature in numerous films with the likes of Prancer-1989, Buffalo Girls-1995, Road House-1989, and Tombstone¬-1993. Years later in 2007, Elliott featured in Ghost Rider as The Caretaker. This was followed by a smaller role in the 2009 film Up In The Air. Some of his most recent roles in the film industry are in Grandma-2015, and I'll See You in My Dreams-2015. In the same year, he was bestowed with Critics' Choice Television Award for the role he played in Justified.

Sam Elliott wedded Katharine Ross in 1984. The couple has one daughter called Cleo Rose Elliott who was born the same year they got married.