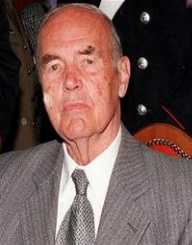 Erich Priebke was born on July 29, 1913. He was a German SS Commander in the SS police force of Nazi Germany. In 1996, he was convicted of war crimes in Italy. This was after his participation in 1944 in the Ardeatine Massacre in Rome. He fled to Argentina after Nazi Germany was defeated. He stayed in Argentina for more than forty years. He died on October 11, 2013, at the age of one hundred.

Erich Priebke was born on July 29, 1913, in Hennigsdorf in the German Empire. His parents died when he was young, and so he was raised by his uncle. Later in his life, he became a waiter at the Savoy Hotel, London, Berlin, and the Italian Riviera. In 1936, he became an interpreter for Gestapo since he knew Italian. He later married Alicia Stoll with whom he had two sons, Jorge and Ingo.

During World War II, the slaughter of Fosse Ardeatine took place in Italy. The attack was led by the Patriotic Action Groups. In 1944, thirty three German personnel of the SS Police Regiment Bozen were killed, and this is what fuelled the massacre. The massacre led to the execution of three hundred and thirty-five civilians who were mostly Italians. Erich Priebke who was then an SS Officer led the execution of the victims five at a time in the Ardeatine Caves.

The victims were shot in the neck, and many others were forced to kneel on dead bodies before they were also executed. Not everyone who was killed that day was a member of the Resistance Group in Italy, and that is why Priebke was tried. In 1946, when he was awaiting trial, Priebke fled from a British prison camp in North Eastern Italy to Vipiteno.

In 1948, Erich Priebke was baptized a second time and was identified as Otto Pape. He later went to Argentina with the leadership of Juan Peron. He lives as a free man in Argentina for more than forty years. He was then traced down to Bariloche in Argentina by ABC News, and he admitted to his role in the massacre yet he was not remorseful. He was later arrested by Argentinean authorities and placed under house arrest at his home in Barichole since he was old and could not be taken to jail.

In 1996, Erich Priebke was extradited to Italy following numerous trials in Argentina. In Italy, he was taken to court, and he pleaded not guilty. He did not deny what he did, but he denied any form of moral responsibility.  He was later convicted of crimes against humanity but was never jailed.

Erich Priebke died on October 11, 2013, in Rome at the age of one hundred natural causes. The Argentinean refused to take his body to Argentina to be buried. The Germans also declined to take the body. His coffin was later seized by Italian officials who buried his body in a secret place that no one knows to date apart from the people who buried it.