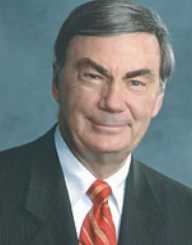 Sam Donaldson is an American reporter known for his work with ABC News.

Samuel Andrew Donaldson Jr. was born in the city of El Paso, Texas, on March 11, 1934. His father, Samuel, was a farmer who passed away before he was born. His mother, Chloe, was a school teacher. He had an older brother named Tom. He grew up on a farm in New Mexico. He attended the New Mexico Military Institute. He served as an artillery officer in the U. S. Army for three years. He graduated from the University of Texas at El Paso with a degree in telecommunications. He then studied graduated school at the University of Southern California.

In 1959, Sam Donaldson got a job at KRLD-TV, the Dallas affiliate of CBS. In 1961, he joined WTOP-TV, the CBS affiliate in Washington D. C. He covered both local and national stories, including the Civil Rights Act, the funeral of President Kennedy, and the Medicare bill. He soon became the news anchor for the weekend news.

In 1967, Donaldson became the Washington correspondent for ABC News. Two years later, he began anchoring the weekend news at 11 pm. He covered many important events, such as the Vietnam War, the Watergate scandal, and Jimmy Carter’s presidential campaign. In 1977, he was appointed as the network’s White House Correspondent. In 1979, he started anchoring the Sunday evening World News. In 1981, he started serving on the panel of the Sunday morning program This Week with David Brinkley. He became one of the co-hosts on the program in 1996, together with Cokie Roberts. He was finally replaced in 2002.

In 1989, Sam Donaldson stopped serving as ABC News Anchor and as White House Correspondent. Instead, he became the co-anchor of the news magazine program Primetime Live, together with fellow reporter Diane Sawyer. He covered many events that brought great attention. He went to Argentina to catch the escaped Nazi officer Erich Priebke. He also went to Sarajevo to cover the Balkan wars and to Kuwait City to cover the First Persian Gulf War. From 1997 to 1999, he resumed his position as White House Correspondent. He covered the scandal of President Bill Clinton and Monica Lewinsky. From 2001 to 2004, he hosted The Sam Donaldson Show – Live in America. It was the first online live news broadcast. He then started hosting the show Politics Live.

In 2009, Sam Donaldson stepped down from his full-time position at ABC. He continued serving as the occasional contributing correspondent. In 2013, he went into official retirement.

Sam Donaldson was known for his aggressive and straightforward style of interview. In 2006, he had a minor confrontation with President George Bush.

In 1995 and in 1996, Donaldson was exposed for receiving Federal subsidies and resources for his ranch in New Mexico. Given his wealth, this triggered many discussions as to whether the situation was fair towards poorer farmers. In 2004, three dead bodies were found on his ranch. The police revealed one of the workers had shot his family members. In 2012, Donaldson was arrested for drunk driving in Delaware. The charges were dropped almost a year later.

Sam Donaldson was married to Billie Kay Butler from 1963 to 1980. From 1983 to 2014, he was married to Jan Smith. He had a total of four children from these two marriages – sons Samuel, Thomas, and Robert, and daughter Jennifer. In 2014, he married his current wife, Sandra Martorelli.