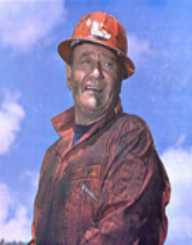 Legendary American firefighter Red Adair was born in Houston, Texas into an Irish immigrant family on the 18 June 1915. His father Charles was a blacksmith and, as a child, Red Adair spent time with him in his workshop.

He was a pupil at Reagan High School but left without graduating to work as a laborer.

In 1936 he got a job on the Southern Pacific Railroad. His first job in the oil industry was when he was employed by the Otis Pressure Control Co in Houston.

After the war, Red Adair worked with Myron Kinley who specialized in oil-well blowout and fire control. Adair remained there for 14 years and then set up his own business Red Adair Co. He became known for his clever marketing with his red uniforms and helmets which he also sold to admirers. During this time he dealt with fires on land and sea nationally as well internationally. Over the course of his career fighting oil-well fires, Red Adair was involved in the capping of the first US land well, fighting a fire on a vessel at sea as well as an underwater wild well. He was also involved with the Catco fire (1959), the Devil’s Cigarette Lighter (1962), the Bay Marchand field (1970), the Bravo in the North Sea (1977), the Ixtoc fire in the Gulf of México (1979),  the Piper Alpha explosion in the North Sea (1988) and the massive fires throughout  Kuwait in 1991.

Red Adair was married to Kemmie, and the couple had two children. He retired in 1994 and died on the 7 August 2004.