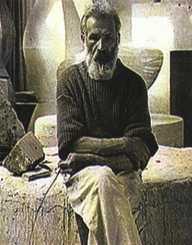 Constantin Brancusi was a renowned Romanian sculptor whose work is well established in France.  He is considered as the pioneer of modernism and also called the patriarch of modern sculpture. Many people have referred to him with different names and titles such as Princess X, Fish, and Bird Space. Constantin Brancusi was also known for his ability to blend different materials with a restrained and sensitive style from primitive to sophisticated.

Constantin Brancusi was from a humble background in Romania, and as a child, his love for carving had always been displayed as he carved woods with farm tools. Some of his most famous works such as the ‘The Kiss,’ ‘Sleeping Muse’, ‘Bust of a Boy’ among others made him a key influence in sculpture.

Constantin Brancusi was born on February 19, 1876, in Hobita, Gorj, Romania to poor peasants Nikolai and Maria Brancusi. From a very young age in farm Brancusi would carve woods using farm tools, even though he never got a formal education. At the age of nine, he left to work for a dyer and a grocer. At the age of eleven, he had already become a domestic help in Craiova where he lived for several years.

At the age of eighteen, while he was still working, Constantin Brancusi crafted a wooden Violin from little materials he came across in his workplace. A Philanthropist saw his work and felt impressed to the extent that he enrolled him in the Craiova School of Arts and Craft.

Constantin Brancusi graduated with honors in 1898, after which he entered the Bucharest School of Fine Arts, where he was thoroughly trained in sculpture. As a hardworking student, Brancusi under the direction of his anatomy teacher created a masterfully rendered e’corche’ (status of a man with skin removed to show his muscles under) which the Romanian Athenaeum exhibited.

Constantin Brancusi at a young age took a bold step in pursuit of his dreams and went to Munich. There in Munich he was disappointed and came back. Then he moved to Paris from there where he worked at a workshop called the E’cole des Beaux-Arts and from there to Auguste Rodin workshop. Constantin Brancusi wanted to create a name of his own, so he left Auguste Rodin’s. It helped him as he was able to discover his style, trying to break away from the old traditional art.

In 1907, Brancusi commissioned his first work, ‘The Prayer”. This marked the first step into Modernism. This followed the creation several versions of “Sleeping Muse and The Kiss.”

By 1909, Constantin Brancusi has already been fairly known; his style of sculpture became smoother with contours in marbles and bronze. His work became popular among sculptures, collectors from a different part of the world especially from France, U.S, and Romania. The noble John Quinn praised and bought his works. In 1920, Constantin Brancusi became more known for his Princess X in Salon, which got a lot of controversial sexual statements. Some argued that it represented a female obsession with the penis. Although Constantin Brancusi tried to explain that it only represented womanhood. Princess X became one of his famous works, and he was nicknamed Princess X.

In 1926, Edward Steichen a photographer purchased some versions of Brancusi’s ‘Bird In Space.’  He was stopped by the customs arguing that the Bird is an industrial item.After several assessments, it was discovered that the Bird was a work of art. Constantin Brancusi concluded the World War I monument in the country. Brancusi became a French citizen in 1952.

Constantin Brancusi work has been displayed in a different part of the world, ‘The Kiss’ was exhibited in Armory Show and several of his works at displayed at Salon des Independents. His Bird of Space has also been displayed in Philadelphia Museum of Art. In 1913, he was recognized after his exhibition in Armory Show New York.He was elected posthumously to the Romanian Academy in 1990.

Constantin Brancusi died in France on March 16, 1957, at the age of 81. As a French citizen, he was buried in Paris. After his death, it was discovered that Constantin Brancusi left about 1200 photographs and 215 sculptures. Brancusi has been an inspiration to a lot of people including Swedish architect Klas Anshelm, Georg Olden. After his death in 1990, he was elected posthumously to the Romanian Academy.

Constantin Brancusi though became a French national; he never lost contact with his Romanian roots. He was known to wear traditional Romanian attire during important functions. He made his studio have a feel of peasant presence. He had interest in Mythology, especially Roman mythology, folk tales, and art.

Constantin Brancusi was never married although he had many relationships. One of them with pianist Vera Moore gave him a child that he denied.