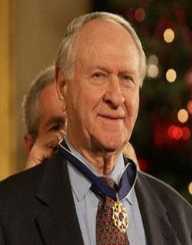 American writer William Safire is an author who is known to be the man behind former US President Richard Nixon's speeches. He also did work as a columnist on The New York Times. He was a frequent guest on NBC program's Meet The Press.

He died at the age of 79 on September 27, 2009, in Rockville, Maryland from suffering pancreatic cancer.

William Safire was married to Helene Julius. The couple has two children together: a son named Mark and a daughter named Annabel.

Born on December 17, 1929, as William Lewis Safir to Ida and Oliver Craus Safir in New York, he came from a family of Jewish lineage. Even though most of his relatives still use their original surname, Safir added the "e" in his surname due to pronunciation reasons.

He attended a specialized public high school city in New York, called Bronx High School of Science where upon graduation he enrolled at Syracuse University. However, Safir only attended the university for two years before he dropped out.

William Safire involved himself in the world of media and found work as an army correspondent and was a producer for television and radio programs. He made connections from there and even became a public relations executive for five years from 1955 to 1960.

He is most well-known for working as Richard Nixon's speechwriter. He was involved in the former US president's 1960 presidential campaign and a second time when he ran again in 1968.

When Apollo 11 was launched to the moon, William Safire wrote a doomsday speech for the former president entitled In Event of Moon Disaster. The speech was fortunately not used, but it was listed under The Greatest Doomsday Speeches Never Made in 2013.

Aside from speechwriting, William Safire also found himself working for the famed The New York Times in 1973. At the New York Times, he was assigned a political column which ran for 32 years from 1973 until 2009. He was the man behind the column "On Language" which appeared on the weekly edition of the magazine until his death.

He has four novels published under his name; the first one is entitled Full Disclosure which was published in 1977 followed by Freedom which was released ten years later in 1987. Two other novels followed entitled Sleeper Spy and Scandalmonger.

William Safire was the recipient of the 1978 Pulitzer Prize. He then served as board member for the Pulitzer Prize for nine years starting from 1995 to 2004. Former US President George W. Bush also awarded him the Presidential Medal of Freedom in 2000.