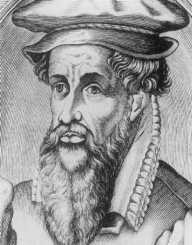 Gerardus Mercator was born at Rupelmonde, Flanders (now Belgium) into a German family. His father was of modest means, and his father worked as a cobbler. He was the youngest of seven children. In his teens, he changed his surname from Kremer to the Latin version of Mercator.

Gerardus Mercator graduated from the University of Louvain in 1532. He had studied geography, astronomy, and mathematics and was taught by Gemma Frisius a noted scholar in this area. Mercator was also shown how to make maps, globes and astronomical instruments by Gaspar Van der Heyden.

In 1534 Gerardus Mercator founded a geographical institute at Louvain University. This is where he began working on series of maps using instruments that he had designed. As Mercator refused to accept the Biblical interpretation of creation, he was imprisoned in 1544 on heresy charges. In the late 1840s, he came into contact with the English mathematician and astrologer John Dee, and they became close friends. Then in 1552, he fled to live in Protestant Germany.

In Germany Mercator fell under the patronage of the Duke of Cleves and moved to Duisburg in the Duchy of Cleves, Germany. After that, Mercator had his workshop and staff where he worked on the Mercator projection. The project eventually led to his map of the world which he produced in 1569. His 1558 plan used a proper ratio of longitude and latitude. From the 1550s onwards he started publishing an atlas. The publication derived its name from the Greek myth of Atlas, the Giant who held the world on his shoulders.

Gerardus Mercator died at the age of eighty-two in 1594.