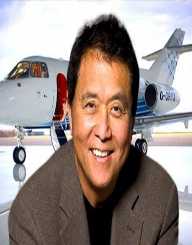 Robert Kiyosaki was born on April 8, 1947, in Hilo, Hawaii. His father Ralph was a teacher and instructor, allowing Kiyosaki to attend better schools. He studied at the Hilo High School and after graduation, enrolled at the U.S. Merchant Marine Academy in New York. He graduated in 1969 and took a position as a deck officer.

After finishing his education, Robert Kiyosaki began working on merchant ships and traveled the world. During his journeys, he saw a lot of poverty and new cultures, which made a major influence on him. In 1972, he began serving as a helicopter gunship pilot in the Marine Corps, during the Vietnam War. After finishing his service in 1974, he was awarded the Air Medal. He then decided to move to New York.

Upon his arrival in New York, Kiyosaki took a position as a salesman for Xerox Corporation and sold copy machines. He held the position until 1978. In 1977 he had enough money saved to start his own company, which produced the first nylon Velcro surfer wallets. He tried to limit the costs of the wallets by lowering the quality and soon the demand went down, which caused the company to go bankrupt.

At the beginning of the 1980s, Kiyosaki started a new business for T-Shirt licensing for heavy metal rock bands. The business was at first a success, but the change in trends in music made his company decline, eventually dissembling in 1985. During the peak of his business, Kiyosaki invested money in stock and real estate, but with the decline of his business, his debts to banks grew, and Kiyosaki was left homeless and penniless.

Despite his failures, Kiyosaki did not lose hope and decided to help people by educating them on how to avoid bankruptcy and achieve success. He began working as a motivational speaker for a personal growth business Money and You. The seminars became increasingly popular and spread from Canada and United States to Australia and New Zealand.

The motivational speaking business became profitable, eventually turning Kiyosaki into a multi-millionaire. He left Money and You in 1994 and retired. Kiyosaki continued to invest in stock and real estate and began writing a book. Together with Sharon Lechter, Kiyosaki wrote the Rich Dad, Poor Dad book. Since he could not find a publisher, he published the book himself. The book was published in 2000 and since then has sold more than ten million copies.
In 1997, he came out of his retirement and started a financial education company Cashflow Technologies Inc. His next venture came in 2002 when he bought a silver mine in South America. Kiyosaki owns assets in several apartment complexes, hotels, and golf courses.

Robert Kiyosaki married Kim Meyer in 1989. She is an entrepreneur, investor, and also a motivational speaker.