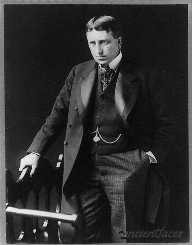 William Randolph Hearst was born on April 29, 1863, in San Francisco, California, USA. His parents were Phoebe (Apperson) and George Hearst.

As a child and teenager, William Randolph Hearst attended many private schools. He came from a rich family, which allowed him to do this during the school year, and vacation in Europe in the summers.  As a young man, William Randolph Hearst attended Harvard University. While there, he worked for the school paper, the Harvard Lampoon. However, he never graduated from the school, as he was expelled for acting foolish and drinking too much alcohol.

Even though he never finished college, his family influence and editing skills were able to land him a job working for the San Francisco Examiner in 1887, as his father owned the paper. He worked at this paper for several years. In 1895, he borrowed money from his mother to buy his own newspaper, the New York Morning Journal. The paper was cheap to buy, as it was not doing well at the time. Hearst hired many new writers and editors in an attempt to revamp the paper.

In the late 1890’s, William Randolph Hearst  began using his paper to push his own political agenda. He was a democratic man, and so he posted stories mostly about democratic events. His paper was highly bias, to say the least. Because of his pushing his political ideals in his paper, he was later accused to manipulating his customers into thinking that the United States should go to war with Spain. This war really did happen, and at the end of it, Spain gave up control of Cuba.

In 1900, William Randolph Hearst  decided to leave the newspaper business on the backburner and try his hand at politics. He ran for president in 1900 but did not win. In 1902, he aimed lower and ran for the House of Representatives, which he did earn. He served in the House for two terms. After his terms were up, he ran to be the mayor of New York City, but he lost the election. He later ran to be governor of New York, but he lost that election as well. Afterward, he quit politics and resumed only working in the news.

Hearst’s mother died shortly after he quit working in politics, leaving him an immense inheritance. He used part of the money to buy more newspaper companies. In the 1920’s, he owned dozens of newspaper companies.  Later on, he bought into the magazine business and owned many popular magazines, including Good Housekeeping.

In the late 1930’s, William Randolph Hearst  began facing financial struggles, both in his business and in his personal life. To save himself from debt, he sold many of his personal items, like paintings he had collected over the years, and sold some of his newspapers as well. After that, he lived more frugally than he had in the past and worked harder to reduce costs in his business.

William Randolph Hearst married Millicent Willson. The couple had five children together: David, George, John, Randolph, and William Jr. The marriage was an unhappy one, as Hearst was known to have cheated on his wife for much of their marriage. The couple was separated but never divorced. Their marriage ended when Hearst died.

William Randolph Hearst died on August 14, 1952, in Beverly Hills, California. He died of natural causes. He was 88 years old when he passed away.

The film, Citizen Kane, was partially based on Hearst’s business life. William Randolph Hearst  was alive when this movie was made, and he did not like how much the film matched his life. He tried to cancel the release of the movie by paying off the director, Orson Welles, but Welles aired the movie, making it one of the most popular movies of the 1940’s.