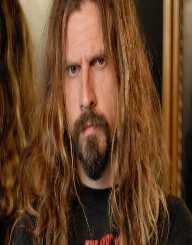 Rob Zombie was born on January 12, 1965, in Haverhill, MA, USA. Zombie isn’t his given name, but it is a stage name that he adopted later in life to use for his band, White Zombie. Instead, his given name is Robert Bartleh Cummings. His parents are Louise Cummings and Michael David Cummings.

Zombie went to the Haverhill High School in his hometown. He graduated from the school in 1983.

Rob Zombie attended the Parsons School of Design in New York for his college education. It was likely there where he refined his graphic design skills which helped him to create the art needed for his album covers and creative ideas for his movies. It was also here that he met one of his girlfriends, Sean Yseult, who helped him to form his band, White Zombie.

Rob Zombie co-formed his heavy metal band, White Zombie in 1985. In the group, Zombie was the lead singer, songwriter, and graphic designer. The other co-founder of the band was Zombie’s then-girlfriend, Sean Yseult.

Peter Landau, the drummer, was also one of the original members of the plan; he was later replaced by Ivan de Prume. Ena Kostabi played guitar but only lasted in the band for about a year before she was replaced by Tim Jeffs.

The band had little success in its first few years (1987-1990), but they gained extreme popularity as their career went on. From 1991 onward they were a favorite band. However, the group broke up in 1998.

Rob Zombie said on the issue in an interview with Metal Hammer magazine that the band had “run its course” and that, “I don't want to blame myself or anyone else in the band — it's just that the band didn't work anymore.” He also mentioned that he would rather the band end on a high note, rather than carry on and make terrible music.

After the breakup of the band, Rob Zombie started in the solo singing career in 1997 but did not release his first solo album until 1998, when he formed his record label, Zombie-A-Go-Go-Records.

White Zombie released their early work until their label, Silent Explosion. Their later albums were produced under various names. Below is a list of some of the most popular White Zombie albums produced before the band disbanded.

Even after the breakup of his band, Rob Zombie continued to have musical success. Below is a list of some of his favorite single albums.

Rob Zombie is also known for his skills as a director, musician, actor, producer, and writer. He has provided music for the soundtracks for over 20 movies. He has also been an actor in almost 20 pieces written nearly 20 articles and has produced and directed about ten pieces in each category.

Some of the most popular feats of Zombie’s film career has been his directing work. Some of the famous movies he has directed are listed below.

House of 1000 Corpses, The Devil’s Rejects, Halloween (and Halloween II), The Lords of Salem, The Zombie Horror Picture Show

Rob was married to Sheri Moon Zombie on October 31, 2002. They were together for nine years previous to their marriage, and they are married to this day.

Even though this star is a hardcore rock n’ roller, he is also an animal rights activist and a vegetarian.

Rob Zombie directs all of his music videos.

He is right friends with both Ozzy Osbourne and Alice Cooper, both famous rock stars like himself.