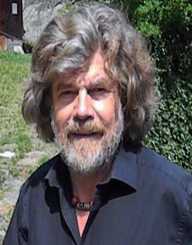 Reinhold Messner is one of the world’s most prominent adventurers and climbers. The 74-year-old Italian is known for climbing Mount Everest without supplemental oxygen in 1978, which sounds impossible to many. He did it with Peter Habeler.

Reinhold Messner was born in a German-speaking Southern Tyrol province of Italy on September 17, 1944. It can be said that mountains have been friends of him since he was born. He was surrounded by the Alps and the Dolomites.

His first love on mountains was when he was five. At that time, he started climbing his first summit, thanks to his father’s role in introducing him to the beauty of mountaineering.

At 13, he started his first challenging climbing experience, on the mountains on the Eastern Alps and he then continued to other Alpine peaks. Reinhold is known for pioneering the Alpine philosophy of climbing, which requires the use of minimal supporting equipment or no support at all.

It was his brother Gunther and also Habler who made him join in this style during the Andes expedition in 1969.

Reinhold Messner and Gunther made an expedition to Pakistan’s Nanga Parbat, the west anchor of the Himalayas in 1970. His brother died when he was unable to go down from the Rupal face after suffering from altitude sickness. Gunther then fell. When Reinhold went back to search Gunther, stated that his brother’s body was swept by an avalanche.

Reinhold Messner lost six toes due to frostbite. But the amputation did not deter his spirit. He continued to climb and make even riskier journeys.

His climbing philosophy that leaves all supporting materials behind can increase the risk of death. But he stated the art of not getting killed is about the chance climbers could die.

After the tragedy in Nanga Parbat, Reinhold Messner did not stop conquering mountains. He climbed Nepal’s Manaslu in 1972 with Frank Jager and Gasherbrum I in Pakistan-China border three years later.

But his Everest expedition with Habeler in 1978 made his name. Despite experts’ and doctors’ opinions saying it was impossible to climb the Everest without the use of bottled oxygen, both Reinhold and Hebler proved that they could.

From 1970 to 1986, he conquered 14 of the world’s eight-thousanders‘ summits without the support of oxygen or device of any sort.

The younger Reinhold Messner said that Yeti was bullshit and that it was all just a myth. It was only in 1986 that Reinhold Messner met Yeti for the first time. At that time he was on a “walk” from the lands of Dege to Lhasa in Tibet for around 1,200 miles. At dusk, when he was climbing a dense slope, he saw something large stepping out ahead of him.

Since then, he had spent his 12 years of life to investigate about Yeti. He had adventured through Pakistan, Nepal, Bhutan, Kazakhstan, Mongolia, and India to find more clues about this mythical creature.

In his books published before 1986, Messner underlined that Yeti is bullshit, but after that year, when he saw that big animal on the slope, he realized that what he saw matched with the legend. However, after spending 12 years of investigation, Reinhold Messner had to conclude that Yeti does not exist. No snowman looks like human living in the mountains. Yeti is nothing more than just a brown bear.

His Yeti investigation was written by himself in a book titled My Quest for the Yeti.

Reinhold Messner is well-known as the first person to top all the Seven Summits, including the Mount Vision in Antartica which he climbed in 1986. When he revisited Antartica in 1989, he didn’t plan on climbing again. This time, he skied across the Antartica with German explorer Arved Fuchs. And more amazingly, they were the first to cross the white continent without any assistance.

In 1993, Reinhold Messner walked across a 2,200 km trek of Greenland. He continued his crazy adventure in 2004 by hiking through and hiking the outskirt of the Gobi Desert in Mongolia all by himself, at two different times.

Reinhold Messner entered the political arena in 1999 when he was voted as a member of European Parliament for the Italian Green Party. He served until 2004.

Reinhold Messner has written several books on climbing in German, but most have been translated into English. Among his works are Antarktis: Himmel und Hölle zugleich (1990; Antarctica: Both Heaven and Hell), describing his Antartica expedition; and Der nackte Berg (2002) The Naked Mountain), about his scary experience in Nanga Parbat in 1970 and his autobiography, Die Freiheit, aufzubrechen, wohin ich will: ein Bergsteigerleben (1989; Free Spirit: A Climber’s Life);

Reinhold Messner is working on the Messner Mountain Museum (MMM). The first museum was opened in 2006, and now the museum is located in five mountain locations, including the Dolomites.

Becoming one of the founders of Mountain Wilderness, Reinhold Messner strives to protect and maintain mountainous regions all over the world. Saying that Mount Everest has been trivialized,

Messner calls on the Government of Nepal to close access for recovery. As a result, Nepal’s tourism ministry has determined that every climber should bring down at least 8 kg of their waste.

Reinhold Messner is a father of four children. He once got married to Ursula Demeter and had one child. Then, he remarried with Sabine, and they have three children together.

After completing his tasks in Parliament in 2004, Reinhold Messner retired from climbing and adventure. He spent his old days focusing on the planning and managing of his museums. The last museum in Corones opened in July 2015, which means that Messner has finished his series of dream museums.

He planned to have his knowledge in the film industry, of course with some terms and conditions applied. He was considering making IMAX films with some Americans.

Not sure about what to expect next, he said that maybe he would just like Milarepa, a Tibetan philosopher: living in a cave somewhere and forgetting everything.

For him, getting old means that he doesn’t have any target to achieve. Reinhold Messner will retreat and spend most of his time with his family.