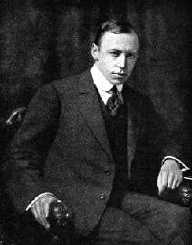 Alfred Noyce was born on the 16 September 1880 in Wolverhampton, England and raised in Wales. His father was a teacher and taught his son Latin and Greek.

Alfred Noyce studied for a time at Exeter College, Oxford but did not graduate.

His first poems, The Loom Years were published in 1902 and were met with a positive response from the literary community including the Irish poet W.B. Yeats.

Alfred Noyce went on to publish five more volumes of poetry: The Forest of Wild Thyme (1905), The Flower of Old Japan and Other Poem (1907). One of his most famous poems is The Highwayman. His epic poem The Torch Bearers consisted of: Watchers of the Sky (1922), The Book of Earth (1925) and The Last Voyage (1930).

During WWI Alfred Noyce moved to the United States and taught at Princeton University until 1923. He published The Unknown God (1934) and If Judgement Comes (1941) both books focusing on religion. World War II he lived in Canada and the United States returning to the UK in 1949. Ocular problems prevented him from doing military service.

Noyes was critical of the modernist movement, including writers such as James Joyce. This criticism in time led to a backlash against his work.

Alfred Noyce married Garnett Daniels in 1907. Garnett Daniels was an American and the daughter of the US Civil War veteran. She died in 1926. A year after Daniel's death, Noyce married Mary Mayne, the widow of a soldier killed in World War I. They lived on the Isle of Wight and had three children: Hugh, Margaret, and Veronica.

After his first wife’s death in 1926, Alfred Noyce converted to Catholicism.