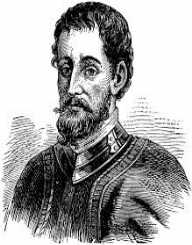 Hernando de Soto was one of the Spanish royal sons. He was born in the year circa 1500, in Jerez de Los Caballeros in Spain.  Also, de Sato was a conquistador and early explorer of the New World. In his lifetime, de Sato managed to go on expeditions in Yucatan Peninsula and Nicaragua. Also, he was one of the people that played significant roles in Conquering of the Inca Empire in Peru.

Alternatively, de Sato was among the first Europeans to extensively explore the southern regions of the present-day United States of America. Moreover, in his expeditions in search of wealth, de Sato became the first European ever to cross the Mississippi River. After failing to get any wealth from his voyages in the new world, de Sato went back to New Spain. There he took back his seat as the governor. Sometime later, de Sato died along the river Mississippi from a fever on the 21st of May, 1542.

Hernando de Soto, a noble baby boy, was born in Jerez de Los Caballeros in Spain. Although de Sato was of high born, he was also from an impoverished noble family. So, he was brought up at the family’s manor. The time when de Sato was to attend school came, but there was no money to send him to school. So, the family sort out the help of a wealthy patron who complied with their request. Therefore, de Sato managed to attend the University of Salamanca.

The family had high hopes the de Sato after coming out of the University would practice law. However, they were met with disappointment when he took his path. So, the young de Sato went out to explore the world instead. His first trip was to the West Indies. This was after he got an invitation to join Davila, governor of Darién. The governor was out on an exploratory voyage to the West Indies. This was in the year 1514.

In the voyage, de Sato had proven himself as one of the best horsemen among the other men. Therefore, governor Darien appointed him as a Captain of a Calvary troop. Upon reaching the New World, de Sato set out as captain with his men in Nicaragua. Later he and his men went all the way to Honduras. In his time de Sato became bolder in his dealing with the natives. Therefore, most of his dealings brought in more wealth.

As time went by, Hernando de Soto had more responsibilities. So, in the year 1532, he got the opportunity to lead a contingent of men to Peru. At the time he was second in command to the expedition party that was tasked to explore and conquer Peru. They found a way of leading to the Peruvian Inca Empire in the year 1533.

Therefore, during the conquering of the empire, he was among the people that contributed to the planning. Also, he later played a significant role in oppressing the Cuzco. Upon, the year 1536, de Sato found his way back home as one of the wealthiest men in Spain. Moreover, de Sato married one of the daughters of his old education sponsor Davila.

Having found his love for the new world Hernando de Soto soon became tired of just staying at home in Spain. Therefore, he set out to go back to the New World. So, de Sato left his wife in Spain. At the time, de Sato had had the tales of Cabeza de Vaca’s explorations. The thought of the riches that he could attain from the new places drew him. Therefore, he sold all of his properties and left for the New World.

After assembling his crew and fighting men, de Sato set voyage to the New World. On their way to America, the fleet of de Sato stopped to give a helping hand to the city of Havana. The French had visited and ransacked the town dry. They also made sure to burn it down. After stopping for some time, de Sat and his fleet got back to their voyage in 1539.

After some time, just after Hernando de Soto had crossed the Mississippi River, he fell grievously ill. The fever had struck him hard. So, on the 21st of May 1542, in Ferriday Louisiana, de Sato met his death at the cruel hands of a fever. Around this period most of his troops had abandoned him and left for the New Spain. Also, some of them had died due to the many diseases that were new to them. So, he wrote a will naming one of his crew members as the leader of the expedition upon his death.