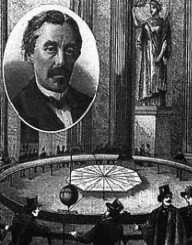 Léon Foucault was a scientist and inventor of the nineteenth century. Though his life was not long, Léon Foucault made groundbreaking discoveries during his time.

Léon Foucault's medical school professor, Alfred Donné, wanted to have Léon Foucaultcontinue his success in the field of medicine without the practical experience with patients.  He hired Foucault as his medical assistant.

Donné was also a physicist and editor of the Journal des Débats scientific journal.  One of their collaborations was in the ability to photograph objects under a microscope.  When Donné retired from the editor position in 1845, he gave the job to Léon Foucault

Léon Foucault continued to work on experiments for the Academy of Sciences.  Using the instruments of other scientists and inventors, he was able to prove in 1850 that light traveled slower in water than in air.  Another invention came in 1851 when he invented a pendulum that showed that the Earth rotated around the sun. The Léon Foucault's Pendulum” is one of the most celebrated inventions and experiments today.  The gyroscope was also one of his inventions that are used in air and space travel as well as telescopes.

When Louis-Napoléon Bonaparte became Emperor of France, he gave the support to amateur scientists such as Foucault.  Léon Foucault was assigned the role of Physicist Attached to the Imperial Observatory.  It was later renamed the Paris Observatory.

In this position, Léon Foucault created powerful telescopes and determined the speed of light.  His accuracy was correct to one half of a percent.

Of Foucault's great discoveries, his demonstration of the Earth's rotation and measurement of the speed of light were groundbreaking.  His invention of the gyroscope was not as important at the time, but it has been important when it comes to the air travel and space exploration.

Léon Foucault will always be noted as one of the great Frenchmen.  This is proven as his name is one of 72 to be inscribed on the sides of the Eiffel Tower in Paris.  The asteroid 5668 Léon Foucault was named after him in 1984.

In 1868, Léon Foucault fell ill.  Some have considered that genetics may have played a role in his early death because his father died young as well.

Some believed he suffered from multiple sclerosis.  Another theory is that he was sickened from the use of many chemicals, including mercury.

Léon Foucault was not a proper scientist using schooling.  For some academics, that did not give him strong credibility.  However, Foucault demonstrated good judgment and clear language when explaining scientific discoveries and experiments.

•    Disproved Isaac Newton's theory of light
•    Demonstrated how the Earth rotated around the sun with the use of the Foucault's Pendulum
•    Measured the speed of light
•    Invented the gyroscope
•    Developed the “knife edge test” to show defects in telescope mirrors
•    Discovered the Eddy currents, often called Foucault's Currents