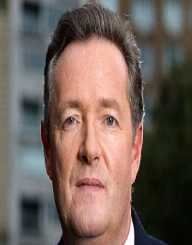 Piers Stephan Pughe-Morgan is a British TV journalist and television host. He was born March 30, 1965. He is the US editor-at-large for mail online. A former judge for America’s got talent, and Britain’s got talent.

Piers Morgan is the son of Vincent Eamonn O’Meara and Gabrielle Georgina Sybille. He was born in Newick, Sussex, England on March 30, 1965. His father was Italian, and a dentist. He died when Piers was still a little child. Piers mother remarried, giving Piers his stepfather’s last name.

Piers grew up in Sussex. He attended Cumnor House School when he was seven which was a private school. He later participated Chailey School when he was fourteen, then Priory school. Both schools are local comprehensive schools. This was because his family couldn’t pay his school fees. He studied journalism at Harlow College.

Piers Morgan’s career took the turn to success when he landed a job at Murdoch Titles. This was where he got his first high profile job in the British media. He was the leading writer of “Bizarre.” He was made the editor of the “News of the world” by Rupert Murdoch. At that time, in 1994 he was 29 and one of the youngest national newspaper editors in history.

His fame grew as a result of him snooping around celebrity privacy. He would reveal even the most secretive things about celebrities. This was very good for the media but bad for the stars. He would say they should live with the consequences of not being able to manipulate the media in their favor.

Piers later left his post in 1995. He was accused of posting pictures of Catherine Victoria Lockwood. The figures showed Catherine going an addictive disorders clinic. This was against the code of conduct for editors. A Press Complaints Commission was held against Morgan. Murdoch, his boss, publicly criticized Morgan for his actions. But this was to ease the legal privacy action if he didn’t slam his employees. He later apologized to Morgan in private.

Piers Morgan’s career moved to TV presentation. He was a presenter on the BBC series “The Importance of Being Famous.” In 2006, he became a judge in the show “America’s Got Talent.” He appeared in the second season of the show in 2007. He was a judge the second time. He was also a judge on “Britain’s Got Talent” that year.

Piers Morgan is married to Celia Walden, a newspaper columnist, and writer. He has four children, three boys, and a girl. The three boys were his first wife, Marion Shalloe. The names of the boys are Spencer, Stanley, and Albert. He married Marion in 1991. They divorced in 2008. Celia gave birth to Elise in 2011.

Piers Morgan claims to be a Premier league fan. He is a supporter of Arsenal F.C. He has criticized the team and its manager sometimes usually on social media and the radio. He was once called a “Pompous Individual” by a former Arsenal goalkeeper defending his manager. Arsenal player, Aaron Ramsey, also refused to shake his hand when they met April 25, 2015. Piers had once criticized him during the 2012-13 season. All Piers did in response to this was calling Ramsey “whatshisname.”

Piers Morgan lives with his family in New York. They sometimes have vacationed in London and California.

Piers Morgan is a Roman Catholic.

Piers Morgan had a little clash with Ian Hislop back in 1996. Morgan was a guest at a satirical news quiz show. The “Have I Got News for You” show. This was a  show in which Ian was a regular. Ian accused Morgan of having his house watched and following him. This conflict turned rough. At a time, the host of the show asked if they would go out and fight! Even guest panelist, Clive Anderson confronted Morgan. He stated that Morgan sent photographers to his house a day after he was rude to Morgan. Morgan humorously said it wouldn’t happen again.

Another television personality and journalist, Jeremy Clarkson had a little spat with Morgan. In October 2003 Jeremy emptied a glass of water on Morgan. This happened during the last flight of Concorde. Clarkson even punched Morgan three times in the face. This was a clash over “The Mirror’s” coverage of Jeremy’s private life.

Janet Mock once had a feud with Morgan. Janet was a guest on his show. She was to discuss her memoir, “Redefining Realness.” After the show, Janet criticized Morgan with a lot of tweets. Morgan had described her as “formerly a man” during the show. The following day, Janet was on the show again to sort out the dispute.

Piers Morgan has also been alleged of hacking the phone of celebrities. He was once interviewed by the police for phone hacking allegations.