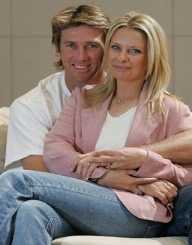 Jame Louise McGrath was born 4th May 1966, to Roy and Jen Steele. She was born in Paignton, Devon, England.

Jame Louise McGrath was a flight attendant, working for Virgin Atlantic Airways. She met Glenn McGrath, a famous Australian cricketer, in 1995. They married in 1999 and had two children, James and Holly.

Jame Louise McGrath was first diagnosed with breast cancer in 1997. Following intensive treatment, she was declared cancer-free in June 1998. She became an Australian citizen on Australia Day in 2002.

Jame Louise McGrath was then diagnosed with metastatic disease in her bones, in 2003. In 2006, brain metastasis was found, and once again she underwent intensive radiation treatment. The tumor was successfully removed. Throughout all these years, Jame Louise McGrath kept a brave public face, and continued diligent work at the Foundation set up by her husband and herself.

Jame Louise McGrath died in June 2008 after becoming severely ill. She was only 42 years of age.

2008:   Awarded a Member of the Order of Australia (AM) for service to community health (for support of women with breast cancer)

Jame Louise McGrath founded the McGrath Foundation, in conjunction with her husband, Glenn, in 2002. Its purpose is to raise funds for breast cancer support to women. It does this by providing more nurses in regional Australia, and by raising awareness in younger women.

By 2015, the foundation had raised over $12 million and had provided over 100 extra Breast Care Nurses.

In addition, the third day of the first cricket test held each year at the Sydney Cricket Ground is dedicated to breast cancer awareness, and the Ladies Stand has renamed the Jane McGrath Stand for the day.

Although McGrath’s husband has remarried, he does a lot of work for their foundation and continues to promote and raise money so that support for those in need can continue.