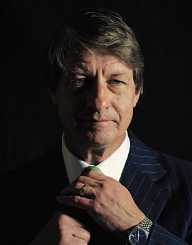 Patrick Jake O’Rourke known with the initials P.J O’Rourke is an American journalist and political satirist. Born on November 14, 1947, he is a regular correspondent for The Atlantic Monthly, The Weekly Standard, and The American Spectator. He is also a frequent panelist on the National Public Radio’s game show, Wait Wait … Don’t Tell Me! And a columnist for The Daily Beast since 2011. In the 1990s, he was the face of British Airways in the long-running advertisement for which he became known in the United Kingdom.

P.J O’Rourke has authored 16 books including Holidays in Hell, a compilation of his articles as a foreign freelance correspondent and All the Trouble in the World, which talks about current political issues including global warming and famine. His book Parliament of Whore was a satiric yet indictment on the US Federal government summing up with the quote "if  government were a product, selling it would be illegal." The book became a best seller, and he published several other best selling books.

Patrick Jake O’Rourke was born on November 14, 1947, to born Delphine (née Loy), a housewife, and Clifford Bronson O'Rourke in Toledo, Ohio. He received his education from De Vilbiss High School in Toledo where he graduated in 1955.

He then enrolled at Miami University for his undergraduate degree and continued at John Hopkins University for his M.A in English. Initially, with leftist political ideology, O'Rourke claims his view underwent a volte-face and began to embrace libertarian conservatism.

P.J O’Rourke started his literary career writing articles for publication. His earlier works include A, J at N.Y.U for the underground magazine/ comic book, The Ripoff Review of Western Culture in 1972. He also wrote for the Baltimore newspaper, Harry, and the New York Ace. In 1973, he joined the National Lampoon as editor in chief and played several other roles. Some of his articles at the time include "Foreigners Around the World" and "How to Drive Fast on Drugs While Getting Your Wing-Wang Squeezed and Not Spill Your Drink".

P.J O’Rourke collaborated with Douglas Kenney to write the Lampoon's 1964 High School Yearbook, which was a bestseller and adapted in the movie Animal House. In 1981, O'Rourke decided to work as a freelance and wrote for magazines like Vanity Fair, Rolling Stone, Vanity Fair and Car and Driver. Until 2001, he was the foreign affairs desk chief at Rolling Stone. He also served as the conservative commentator in the point-counterpoint segment of 60 Minutes.

P.J O’Rourke embraced the Gonzo style of journalism which he used the earliest work including one of his best articles "How to Drive Fast on Drugs While Getting Your Wing-Wang Squeezed and Not Spill Your Drink" for National Lampoon in 1979. This was later reflected in his books, Republican Party Reptile, 1987 and Driving Like Crazy in 2009. In 2001, he published his famous book, Parliament of Whores, with the subtitle, A Lone Humorist Attempts to Explain the Entire U.S. Government, in which O'Rourke argues that "is that politics are boring" making a fan of the US federal government system.

He chose president candidate Hillary Clinton over Donald Trump before the 2016 presidential elections. He said among other things that his endorsement for Mrs. Clinton includes her "lies and empty promises," adding that "She's wrong about absolutely everything, but she's wrong within normal parameters."