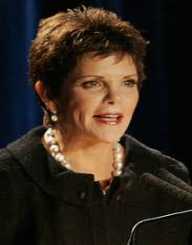 American businesswoman Patricia Cecile Dunn was born on March 27, 1953, in Burbank, California. She grew up in Nevada, Las Vegas. Her father, a vaudeville actor, worked as the entertainment manager for the Dunes and Tropicana hotel-casino. Her mother was a model-cum-show-girl. When she was eleven years old, her father passed away.

After her father’s demise, her mother moved to Marin County, north of San Francisco. In 1970, she joined the University of Oregon. However, she had to drop out, midway through her course due to financial difficulties. She resumed her studies in a short while after working as a house cleaner to support her mother. In 1975, she received her graduation in journalism from UC Berkeley.

Patricia Cecile Dunn began her career in a community newspaper in San Francisco as a part-time reporter. She joined the Wells Fargo Investment Advisors (later known as Barclays Global) as a temporary typist. Her determination, hard work, and exceptional business acumen made it possible to turn the two-week typing assignment into a full-time job.

Rising rapidly through the ranks, she eventually became the CEO at Barclays Global Investors. She also earned a reputation as an ace saleswoman. She was among a handful of woman achievers to be at the helm of a large investment management company in the United States at that time.

Her most credible achievement was the introduction of index funds and other computer-intensive quantitative investment management techniques widely in vogue today. She created the Exchange-Traded Funds, her most significant accomplishment, to become a highly lucrative product. This was after the initial resistance from the firm’s corporate parent.

The significance of ETF lies in its capacity to reflect the industry category or an index. As the CEO, Dunn saw Barclays Global Investors metamorphic rise to become the largest institutional money manager in the United States. Consequently, her name appeared in Fortune magazine’s list of most powerful women in business.

Patricia Cecile Dunn joined HP’s board in 1998. In 2005, she replaced their Chief Executive and Chairwoman Carly Fiorina after receiving a promotion to the post of their non-executive Chairperson of the Board of Directors.

Her tenure with HP witnessed some of the most turbulent times involving some contentious issues that shook the very foundation of the company founded way back in 1939.

A huge spying scandal broke out at HP during 2005-2006. As the company’s board became highly apprehensive about leaks of its deliberations to the press, Dunn handed over a spying operation to an outside agency.

The outsourcing became catastrophic when the agency ran amok by recording the telephonic conversations of the board members and the employees of the company. They even followed these persons and also those journalists who wrote about the company.

One month after the surfacing of the scandal, California’s Attorney General charged Dunn with four felony counts; conspiracy, fraud, identity theft, and illegally using computer data - for her roles in the scandal. Besides Dunn, four other persons were also charged with similar offenses. Dunn refuted the offenses clamped against her and maintained that she was being made a scapegoat.

Patricia Cecile Dunn also added that her actions had the prior knowledge and approval of the members of the board of directors. Later, she testified before a Congressional sub-committee. There it was revealed that it is the lawyers of the company who guided Dunn to authorize the spying operation. All the criminal charges against her eventually dropped. On September 22, 2006, Dunn resigned as a member of the board of directors of HP shortly after Mark Hurd, a former CEO, took over as the Chairman on September 12, 2006.

She had to undergo surgery for a metastasized tumor in 2006. She received the criminal charges against her precisely two weeks before the start of chemotherapy for her advanced ovarian cancer.

Patricia Cecile Dunn married William Jahnke, a former chief of the Wells Fargo Investment Advisors. On December 4, 2011, at the age of 58, she breathed her last at her home in Orinda, California, after losing her battle with ovarian cancer. She is survived by her husband, three children, ten grandchildren, besides a brother and a sister.