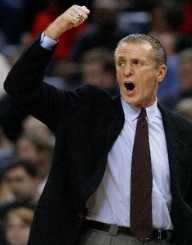 Pat Riley was born 20th March 1945, in New York, United States. He grew up in Schenectady, where his father played in minor league baseball. Pat Riley followed in his father’s footsteps as a sportsman.

Pat Riley attended Linton High School and played basketball under head coach Walt Przybylo. He was part of a famous win for the high school in December 1961, over Power Memorial, also from New York. The two outstanding players of the game were Lew Alcindor from Power Memorial, and Riley, who would later become his coach.

In 1965, as a junior, he won several awards, including being named First Team All-SEC. He was named again in his senior year, making him one of the only players in Kentucky to make two or more First Team All-SEC team selections.

The Lakers won the NBA Championship in 1980, giving Pat Riley his first championship ring, in his first year on the coaching team. Under controversial circumstances, Pat Riley was named head coach of the Lakers in 1981.The Lakers entered what would become known as their “Showtime” era. It helped considerably that he had Magic Johnson and Kareem Abdul-Jabbar (formerly Lew Alcindor) in his team.

Pat Riley became a cult figure in his own right with his slick-backed hair, and his Armani suits. The team made four consecutive NBA Finals appearances. Pat Riley's second NBA title came in 1985, his third in 1987. This was followed up with yet another title in 1988.

Although he won the NBA Coach of the Year in 1989, Pat Riley stepped down from the head coach position when the Lakers lost in the playoffs. Pat Riley's next role was as a television commentator on NBC. He only had the job for one year, after which time he joined the New York Knicks as their head coach. Began with the 1991 season and continued in 1992 and 1993. In 1993, Pat Riley led the New York Knicks to their best-ever regular season.

Pat Riley resigned from the Knicks in 1995 to become the head coach and team president of the Miami Heat. The Knicks weren’t happy with Pat Riley's move, accusing the Miami Heat of approaching Riley while he was still under contract to the Knicks. In 1997, Pat Riley led the Heat to the Eastern Conference finals for the first time in history of the franchise. By 2002 no titles had been won, and Pat Riley stepped down from coaching to concentrate on his position as General Manager. The team continued to perform well, and Pat Riley successfully traded to get Shaquille O’Neal to the team.

In 2005, when the team was poised to contend for the championship, Van Gundy resigned from his position as head coach and Pat Riley took over again. Some maintain pressure was put on Van Gundy to resign. In 2006, the Miami Heat won their first NBA Championship. It was Riley’s fifth championship as head coach.

Life Away From Basketball

Pat Riley published a book, Showtime: Inside the Lakers’ Breakthrough Season, in 1988. The book became a New York Times bestseller.

Pat Riley is also a motivational speaker during the off-season of the NBA. He is considered one of the greatest NBA coaches in history.

Pat Riley's awards and honors are considerable. Some of these include:

He is the first sportsperson in the U.S. to win a championship as player, assistant coach, head coach and executive.

In 2012 he won the Chuck Daly Lifetime Achievement Award.

Pat Riley married Chris Rodstrom in 1970. The couple has two children, a son, James, and a daughter, Elisabeth.