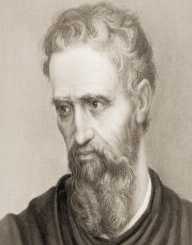 Michelangelo was born on March 6th, 1475 in Caprese, Italy. He was famous for his sculpting, painting and his poetic skills. The High Renaissance period classifies him as one of the greatest artists of all time. His family were small-scale bankers and therefore was not that rich. Before taking his painting as a full-time career, Michelangelo was an apprentice to a painter.

Later on, Michelangelo went to study in sculpture gardens which belonged to the Medici family. This is where his career took a turning point as he became famous. Some of his famous works during his era include "Pieta" and “David” statues. He is also credited for the ceiling paintings of Sistine Chapel in Rome which featured paintings such as “Last Judgment.” Michelangelo passed away on February 18th, 1564.

Michelangelo's birth name was Michelangelo di Lodovico Buonarroti Simoni. He was born in 1475 in a place called Caprese, Italy. His father, Leonardo di Buonarroti Simoni, was a magistrate in one of the small villages of his town. His mother was named Francesca di Neri del Miniato di Siena. Michelangelo was the second born in a family of five children.

The family migrated to Florence when Michelangelo was still a toddler. Unfortunately, his mother passed away after prolonged illness. This left the family with no option but to leave him to be catered for by a stonecutter’s family. He was at the age of six when all these happened. Around this time, he still had no foreseeable interest in academics. Consequently, he found himself enjoying drawing. After some time, he was introduced to a famous painter named Domenico Ghirlandaio.

His father had also noticed that Michelangelo raised no interest in knowing more about the financial business of the family. This prompted him to apprentice him when he was just 13 years old. This was at Ghirlandaio’s workshop where he got equipped with the fresco technique. After spending a full year at this workshop, Ghirlandaio recommended him to try out the Florentine ruler’s (called Lorenzo the Magnificent) palace. Here, Michelangelo learnt classical sculpture.

The opportunity to learn classical sculpture at the highly acclaimed Medici gardens also gave Michelangelo the chance of meeting the royal Medici family. He spent quality time from 1489 to 1492 with this family. This also gave him the advantage of meeting highly esteemed people of the Florence society. He also worked with a renowned sculptor, Bertoldo di Giovanni not forgetting the fact that he brushed shoulders with famous poets in history. This contributed positively to his poetic career.

Political conflicts soon erupted and during this time Lorenzo the Magnificent had passed away. This made Michelangelo migrate to Bologna before later returning to Florence in 1495. At this point in his life, he made up his mind to begin his work as a sculptor.

“Pieta” And Other Works

A few years later, Michelangelo shifted again to Rome. Around this time, he finished sculpting his famous work "Pieta." This sculpture portrayed Mary holding the dead body of Jesus on her laps. He had been instructed by Jean Bilhères de Lagraulas who was the French Ambassador. Michelangelo’s sculpture received numerous reviews, and it became the most celebrated masterpieces of sculpting at that time.

After being hailed for his exceptional prowess in sculpting, Michelangelo soon travelled back to Florence in 1499. Here, he began working on his next commission which was to sculpt the statue of David. This was a work that he completed in 1504.

After completing the statue of David, he followed his work with his famous painting of Sistine Chapel’s ceiling. The chapel ceiling was 65-foot, and Michelangelo worked on it on his own after previously firing all his assistants. Surprisingly, he did not expose the project until it was fully completed in 1512.

In 1541, Michelangelo revealed his latest work, “Last Judgment.” The painting had been done on the Sistine Chapel’s wall. It received several outcries for portraying nudity in a holy place.

Michelangelo never married during his lifetime. However, he showed commitment to Vittoria Colonna, a widow. His feelings to her were featured in over 300 poems that he wrote. The two were good friends up to the time she passed away in 1547.