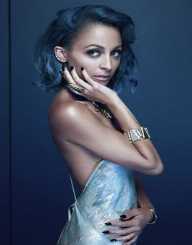 American actress and fashion designer Nicole Richie was born on the 21 September 1981 in Berkeley, California. She is the adopted daughter of singer Lionel Richie and his ex-wife, Brenda Harvey-Richie. Her birth parents are Karen Moss and Peter Michael Escovedo.

Nicole Richie was a pupil at Montclair College Preparatory School, graduating in 1999. She then enrolled at the University of Arizona to do an arts degree but left without obtaining a degree.

Nicole Richie rose to fame when she appeared in a reality series, The Simple Life, with Paris Hilton. The show ran for five seasons.

Richie’s first acting role was in Kids in America. Nicole Richie has since starred in some television shows including Eve, Six Feet Under, American Dreams, 8 Simple Rules for Dating My Teenage Daughter and Chuck. She has done a stint as a guest judge on Project Runway (2010). One of her later roles has been as Portia in the NBC sitcom Great News.

Since 2008 Nicole Richie has been involved in the fashion industry with her own jewelry line House of Harlow 1960. Her high-end clothing range Winter Kate was launched 2010.

Nicole Richie and Joel Madden have been partners 2007 and married in December 2010. They have two children.

In 2003 Nicole Richie was arrested for heroin possession and spent time in rehab. She was also the subject of tabloid headlines over her feud with her former best friend, Paris Hilton.