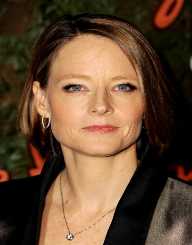 Jodie Foster is an Actress, Producer, and Director.

Jodie Foster was initially born Alicia Christian Foster on November 19, 1962, to Lucius Foster Fisher III and Evelyn "Brandy." She was born in Los Angeles, California. Her father was an Air Force Lieutenant Colonel turned real estate broker. Her mum was a publicist. Her parents had split initially before her birth but had an encounter that resulted in Alicia's birth. Her three older siblings started calling her Jodie, and it became her acting name.

Jodie attended the Lycée Français de Los Angeles and later on to Yale University to study Arts and Literature.

Jodie Foster’s career began very early in life. At the tender age of 3, her first job was a commercial as the Coppertone girl in a television advert. Her brother auditioned for the role, but the casting director took one look at her and chose her instead. She kept on doing ads until 1968 when she did her first TV series, Mayberry P. D.

It was a minor role, and her brother Buddy was already on the show. Nevertheless, soon after, she began to take on more series such as The Partridge Family, The Courtship of Eddie's Father, Bob and Carol and Ted and Alice, Bonanza and Gunsmoke.

Jodie Foster soon began to take on movies, and her feature film debut was in the 1972 movie, Napoleon, and Samantha. She also played Raquel Welch's daughter in the 1972 film, Kansas City Bomber.She played a delinquent tomboy in the 1974 movie, Alice Doesn’t Live Here Anymore.

By the time she took on Martin Scorsese's 1976 Taxi Driver, Jodie was the most experienced actor there. She was twelve and had to play an underage prostitute alongside Robert De Niro and Martin Scorsese. She was assigned to a child welfare therapist who ensured that the movie didn't scar her psychologically and that she wasn't there when there was any swearing. Her sister played her body double for the more sexual and violent parts of the movie.

Next Jodie went on to play Tallulah in the 1976 movie musical, Bugsy Malone. She won two BAFTA awards for Best Supporting Actress and Most Promising Newcomer to Leading Film Roles for both appearances. She also starred in other movies like Freaky Friday that same year.

Jodie Foster slowed down her acting pace when she went to Yale on 1980, although she did a few movies during the holidays like O'Hara's wife in 1982 and The Blood of Others in 1984 to mention a few. Between 1986 till 1988 she kept doing a lot of movies like Five Corners. She even had a shot at directing an episode of the horror anthologies Tales From the Darkside.

In 1988, Jodie Foster played a waitress who was gang-raped and blamed for it as she fought for justice in The Accused. For the performance, she won an Oscar, a Golden Globe, a National Board of Review award and a BAFTA nomination.

After the success of The Accused, Jodie Foster played Claire Starling in the 1991 movie, Silence of the Lambs and although the Director, Jonathan Demme was reluctant to cast her, his opinion changed of her during the shooting of the film and he credited her for bringing life to the character. The movie was mostly successful, and one of the few movies to hit all main category nominations and Jodie herself won an Academy Award, a Golden Globe and a BAFTA award for her portrayal of Claire.

In 1992, Jodie produced her company, Egg Pictures. She played alongside Richard Gere in Somersby in 1993 and alongside Mel Gibson in the 1994 movie, Maverick.

In 2000, Jodie produced The Walking Dead. She turned down the offer to play Claire Starling once again in 2001 Hannibal. She instead concentrated on a movie; Floral Plum set in 1930s circuit that was to star Russell Crowe and Clarke Danes. However, the film was never completed because Russell got injured on set. She tried over the years unsuccessfully to revive it, but it never worked out. In 2001, she closed down Egg Pictures.

After shelving Floral Plum, Jodie Foster replaced Nicole Kidman in the 2002 movie, Panic Room. She was given only a week to prepare, but the movie was a smash hit. She also played in the 2006 Inside Man with Denzel Washington. She was also in the 2007 movie, The Brave One which although wasn't wholly successful, gave her a sixth Golden Globe nomination.

More recently, Jodie Foster focuses more on directing, taking on fewer acting roles like Carnage in 2011 and Elysium in 2013. She also directs series as well such as an Episode of House of Cards, Orange is the New Black, and Lesbian Request Denies for which she got an Emmy nomination and two Directors Guild of America Award nominations as well.

While Jodie Foster was a freshman at Yale, she had a stalker, John Hinckley Jr. He attempted the assassination of President Ronald Reagan and claimed he did it for her. He was a huge fan of Taxi Driver. This was the movie that resulted in his obsession with Jodie Foster.

There were rumors that her brother was to write a tell-all book and claimed that she stole his budding career. The rumors, however, remain unsubstantiated as Jodie doesn't talk about her family.

Jodie Foster dated Cyndy Bernard from 1993 till 2008. She met him during the shooting of Sommersby, and they had two children. In 2014, she married her girlfriend, Alexandra Hedison.