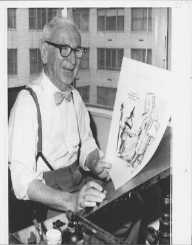 Reuben Garrett Lucius, AKA Rube Goldberg was born on July 4, 1883. His place of birth was in California, USA. He gained his popularity from being a creative cartoonist. He was also a skilled writer, engineer and a sculptor. His drawing passion came out naturally while he was still young. His future aspirations were to venture into the art career. In spite of this, he followed advice from his father that he should pursue engineering. With time, he switched careers and went on to become a famous cartoonist.

Rube’s fan base grew gradually as he focused on political and satirical cartoons. His fame made him receive death threats for the political cartoons he drew. This occurred during the World War II era. During his cartoonist career, it is believed that he developed approximately 50,000 of them. His career earned him a lifetime achievement as he was awarded Pulitzer Prize - (Peace Today) in 1948. His cartoons educated people that they should be cautious with atomic weapons.

Rube Goldberg was born on July 4, in 1883. His parents were Max and Hannah. His mother was an immigrant with a German–Jewish descent. Goldberg was the third born in a family of 7. Three of his siblings died while they were still toddlers. At the tender age of 4, Goldberg had begun to trace illustrations. Later on, when he was 11 years old, he enrolled for professional drawing lessons.

Soon after graduating from school, Rube Goldberg landed a job as an engineer at the Water and Sewers Department. His primary duty was to design sewer pipes. He worked here for only six months before leaving. He went on to join the San Francisco Chronicle, a newspaper and became their art assistant.

Moments later, he also landed another job as San Francisco Bulletin - sports cartoonist. He worked here until 1907. With his talents taking him places, he launched a rib-tickling series named Mike and Ike. This comic series was meant to feature a story of two identical twins. However, the comic series did not succeed at first, but Goldberg never lost hope. His persistence bore fruits as the series later became a major hit.

In 1907, Rube Goldberg shifted locations and went to New York City. Here, he was a freelancer. He also landed a job as a cartoonist in New York Evening Mail newspaper. While working for this publication, he launched Foolish Questions which ran successfully from 1908 to 1934. What made the content enjoyable is that it revolved around sarcastic responses that are usually given to sarcastic questions.

Rube Goldberg earned the Pulitzer Prize for his political and satirical cartoons that educated people about atomic weapons. In 1955, he was awarded for his artistic contributions by being recognized by Gold T-Square Award. He also earned banshee’s Silver Lady Award for his original artwork.

Rube Goldberg tied the knot with Irma Seeman on 17th October 1916. The two had two children George and Thomas. Goldberg later died in 1970 at the age of 87.