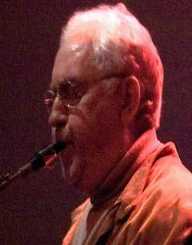 Lee Konitz was born on October 13, 1927. He is an American saxophonist and composer. He performs different styles of jazz. He has played jazz styles such as bebop and cool jazz among others. He participated in ‘Birth of the Cool’ sessions which were established by Miles David. He also worked with pianist Lennie Tristano. He is an alto saxophonist.

Lee Konitz was born on October 13, 1927, in Chicago in the United States of America. He was born to Jewish parents. When he was eleven, a clarinet was the first instrument he got as a present. He later developed an interest for the tenor saxophone. Tenor was not so appealing to him, so he then moved to the alto saxophone. He was greatly influenced by the big swing bands while he was growing up. Lee loved listening to Benny Goodman the most.

In 1945, Lee Konitz began his professional career. He joined the Teddy Powell band acting as a replacement for Charlie Ventura. The band parted a month after he had joined, but this did not stop him from pursuing music and playing the saxophone. He later worked with Jerry Wald, but it was not consistent. They worked in a small cocktail bar to achieve a living.

In 1947, he found work with Claude Thornhill. In this arrangement, Gil Evans was arranging while Gerry Mulligan was the composer. In 1948, he briefly worked with Miles Davis in a small group that had bookings that year. In the following year, another booking presented itself. In 1949 and 1950, he recorded with sides in the album ‘Birth of the Cool’. In 1949, he led the sides, and they ended up recording the album ‘Subconscious- Lee’.

The early 1950s saw Lee Konitz record and tour with Stan Kenton’s orchestra. While touring with the Orchestra, he continued recording in his name. In 1961, he recorded ‘Motion.’ He was assisted by Elvin Jones on the drums and Sonny Dallas on the bass. In 1967, he recorded ‘The Lee Konitz Duets’ which featured duets he did with a series of singers. In 1971, he contributed to the film score for the film ‘Desperate Characters’.

Ten years later, Lee Konitz performed at the Woodstock Jazz Festival. This Festival then was held to celebrate the 10th anniversary of the Creative Music Studio. He has recorded and performed with musicians such as Gerry Mulligan, Ornette Coleman, Dave Brubeck, Elvin Jones and Charles Mingus among many others. He later recorded a pair of trio dates with Charlie Haden and Brad Mehldau. As he grew older, Lee managed to experiment with music and instrumentals leading to albums that are loved by many.

Lee has had problems with his heart in the past, and at one time he needed surgery to solve the problems. In 2012, he performed at the Blue Note, Greenwich Village in collaboration with Bill Frisell, Joey Baron, and Gary Peacock.

Lee Konitz is currently ninety years old and still enjoys playing and experimenting with the saxophone.