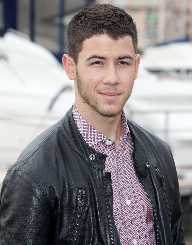 Actor and musician Nick Jonas was born on the 16 September 1992 in Dallas, Texas to Paul Jonas and Denise Miller. He was raised in Wyckoff, New Jersey. There were four boys in the family: Joe, Kevin, Nick, and Frankie. When he was still quite young, his mother realized that her son had the singing ability.

From a young age, Nick Jonas appeared in various Broadway productions. His first Broadway appearance, at age seven, was as Tiny Tim in A Christmas Carol. This role was followed by appearances in Beauty and the Beast, Les Miserables and Annie Get Your Gun.

His debut single was Joy to the World (A Christmas Prayer), a song he co-wrote with his father (2003). In 2004, Nick Jonas was signed to Columbia Records and his second single, Dear God was released. Due to change in management at Columbia Records, it was decided to sign the Jonas brothers up as a group, The Jonas Brothers. This group consisted of Jonas and his brothers Kevin and Joe. Their debut album, It’s About Time came out in 2006, but Columbia Records dropped them in 2007.

The Jonas Brothers then signed with Hollywood Records, and their music received coverage on the Radio Disney as well as the Disney Channel. Their album Jonas Brothers was released in 2007 and was followed by A Little Bit Longer (2008) and Lines, Vines and Trying Times. During this time the Jonas Brothers had three albums on the Billboard Top 10 simultaneously. Apart from his work with his brothers, Jonas has toured with The Administration, continued acting on stage and has worked in television.

Nick Jonas is a Type I Diabetic.

Nick Jonas is active in the Change for the Children Foundation which he founded with his brothers to work with various charities focused on childhood diseases.