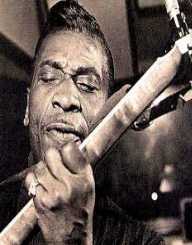 Aaron Thibeaux Walker also known as Oak Cliff T-Bone was born on May 28, 1910, in Linden, Texas, United States. He was a renowned American composer, musician, and blues guitarist. He was the earliest pioneer of both electric blues and jump blues type of music. Walker was placed at number sixty-seven by the Rolling Stone magazine on its list of ‘The 100 Greatest Guitarists of All Time’ in 2011. He was active from 1928 until 1975 and died on March 16, 1975, at the age of sixty-four.

T-Bone Walker was born Aaron Thibeaux Walker to musicians Rance walker and Movelia Jimerson. He was born on May 28, 1910, in Linden, Texas, United States. Walker had a passion for music from an early age and was brought up in a musical environment. He was taught how to play several musical instruments including piano, guitar, and violin by his stepfather Marco Washington.

His early musical career began in Dallas in the 1920s. At the age of ten, he dropped out of school to pursue music full time. By the age of fifteen, he had become a professional musician particularly in the field of the blues genre.

In 1929, T-Bone Walker released his recording debut with Columbia Records under the name Oak Cliff T-Bone. He released two singles titled ‘Wichita Falls’ and ‘Trinity River Blues’ alongside Douglas Fernell who played the piano accompaniment. At the age of twenty-five, he started working in several clubs in Los Angeles together with Les Hite’s orchestra. He sometimes played the guitar or would pick up a singing role. In 1940, Hite recorded their label featuring him as a singer.

Two years later, he moved to Chicago and did several performances at the Rhumboogie Café owned by Charlie Glenn. In 1944 and 1945, he participated in the Rhumboogie label recording alongside Marl Young’s orchestra. From 1946 to 1948 he recorded for Black & White Records and also did his major hit song titled ‘Call It a Stormy Monday (But Tuesday Is Just as Bad)’ in 1947. He also recorded other songs including ‘Bobby Sox Blues’ and ‘West Side Baby’ in 1947 and 1948 respectively. His musical career also saw him collaborating with top the list musicians including Billy Hadnott, Jack McVea, Teddy Buckner and Lloyd Glenn.

From 1950 to 1954 T-Bone Walker recorded for Imperial Records with Dave Bartholomew as his back up. He worked for the next five years recording ‘T-Bone Blues’ which was released in 1959 by Atlantic Records. His musical career, however, started slowing down by the early 1960s with only a few performances done. In 1968, he recorded ‘I Want a Little Girl’ for Delmark Records. He remained active from 1968 until 1975 recording for Robin Hemingway’s music publishing company.

In 1971, T-Bone Walker received a Grammy Award for Best Ethnic or Traditional Folk Recording for the song ‘Good Feelin’.

T-Bone Walker married Vida Lee in 1935 and together had three children. His musical career was significantly affected after he suffered a stroke in 1974. He died a year later on March 16, 1975, in Los Angeles, California, United States. He was aged sixty-four at the time of his death. In 1980, he was inducted into the Blue Hall of Fame. Seven years later in 1987, he was inducted into the Rock and Roll Hall of Fame.