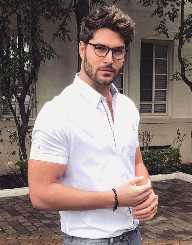 Nicholas Kevin Stanley Yunge-Batemanbest known as Nick Bateman is a Canadian actor and model and social media star. Initially working as a Karate teacher, he later found himself in acting starring in the film and television series including Hobo with a Shotgun. He has modelled for brands. Bateman who has gained massive social media followers with about six million on Twitter has been signed by the Rogue Management in Los Angeles.

Nick Bateman was born on November 18, 1986, in Ontario, Canada. At a very young age, he fell in love with martial arts which pushed him to have training in Goju-Ryu karate and bo staff. He mastered the art in a face pace and competed in several world and local events. He competed and won four world titles in the under 15 and 17 National Blackbelt League during his teenage era. Bateman later enrolled at the Capilano University in Vancouver and graduated at the age of 20.

After graduating from University, Nick Bateman set up his Karate training school. He later ventured into acting and modelling, doing routine travels to Milan, New York and Miami for some works. He has modelled for popular brands like  Calvin Klein, Dsquared, Fila, Abercrombie & Fitch, and Jockey. He had his acting debut in 2011 in Ethos in which he played Nick. In that same year, starred in the film, Hobo with a Shotgun as Ivan. He has also starred in films like The Hazing Secret, 2014, Tapped Out, 2014, Airplane Mode, 2016 and Apple of My Eye to be released in 2017.

With his presence in films and modelling works, Nick Bateman became a social media mania. His stature and body shape coupled with the daily upload of shirtless pictures, Nick gained prominence of social media having lots of followers. On Instagram, he has about six million followers