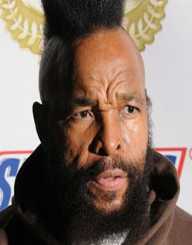 The American actor Laurence Tero Tureaud who portrayed Mr. T in the television series The A-Team was born on the 21 May 1952. He was born into a family of twelve children, having seven brothers and four sisters. The family lived in public housing in a poor area of Chicago, Illinois. As a child, he witnessed a lot of violence in his neighbourhood. His father, Nathaniel Tureaud, was a minister who abandoned his family when Tureaud was five years old, leaving his wife to raise their children.

Tureaud graduated from Dunbar Vocational High School. He took up wrestling at high school and won two championships. He was also a gifted footballer and won a scholarship to Prairie View A&M University. He studied mathematics at university but was expelled after 12 months.

After being expelled from university, Laurence Tero Tureaud joined the US Army. He was in the Military Police Corps and was nominated as the Top Trainee of the Cycle and promoted to a squad leader. After his army service, Tureaud was keen to play in the National Football League, but when he tried out for the Green Bay Packers, a leg injury ruled him out. He then worked as a bouncer and later a bodyguard. Celebrities he protected as a bodyguard included Muhammad Ali, Diana Ross, and Michael Jackson.

Laurence Tero Tureaud won NBC-TV’s Sunday Games: America’s Toughest Bouncer a well as NBC-TV’s Games People Play. Around this time he adopted his Mandinka warrior hairstyle, and when Sylvester Stallone saw him in America’s Toughest Bouncer (1980), he auditioned him for Rocky III. He won the role of Clubber Lang, the protagonist. The film was a massive hit worldwide and led to other work. He appeared in D.C. Club (1983), had his cartoon series on NBC, Mr. T and he recorded an album, Mr. T’s Commandments.

His next significant role was playing Mr. T in the television series The A-Team, which centred around four Vietnam veterans. After his health issues in the mid-1990s, he appeared in an episode of Inspector Gadget and also appeared in Not Another Teen Movie, Judgement and The Proud Family. He had a reality show I Pity the Fool (2006), as well as  I, Pity the Tool (2015), a home renovation show. He also appeared on Dancing With the Stars, Season 24 (2017) with Kym Herjavec as his partner.

In 1985, Laurence Tero Tureaud took up professional wrestling when he became Hulk Hogan’s tag-team partner at the World Wrestling Federation’s inaugural WrestleMania I. He went on to win the event and become a special WWF boxer. He went on to fight Cowboy Bob Orton on Saturday Night’s Main Event (1986) on NBC. He also boxed Roddy Piper on WrestleMania II. Tureaud won the match in Round 4.

The World Wrestling Federation invited him to appear as a special guest referee in 1987 and 1989; he made another appearance in World Class Championship Wrestling. In October 1994, he was a special referee during a Hogan-Ric Flair match. The same year, he wrestled against Kevin Sullivan and won. Some years later, he made an appearance in the front row on an episode of WWF Raw (19 November 2002). Tureaud was inducted into the World Wrestling Federation’s Hall of Fame Celebrity Wing in April 2014.

In 1995, Laurence Tero Tureaud was diagnosed with T-cell lymphoma; he went into remission in 1999.

Mr. T assisted in the cleanup after the devastation of Hurricane Katrina in 2005 and afterwards announced that he would no longer be wearing the gold chains and jewellery that were his trademark. As a born-again Christian, he felt that given what he had witnesses, wearing the gold chains was insensitive. He was married to Phillys Clark, and they share two daughters, Lesa and Erica, and a son, Laurence Tureaud Jr.