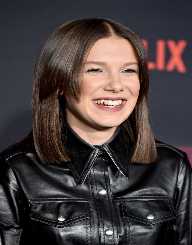 Millie Bobby Brown was born on February 19, 2004. She is an American actress and social media personality. She started acting when she was eight years old. She has appeared in series such as ‘NCIS’ and ‘Stranger Things’ among others. She is also a talented singer. She has two million followers on Instagram and more than four hundred thousand followers on Twitter.

Millie Bobby Brown was born on February 19, 2004, in Marbella, Spain. She was born to Robert Brown and Kelly Brown. She was brought up alongside three siblings Paige, Charlie, and Ava. She is currently thirteen years old. In 2012, her family moved to Orlando, Florida. She attended an acting workshop during her free time. Her talent in acting captured the attention of a top Hollywood talent scout. Her family later moved to Los Angeles to help her achieve her dreams of acting. In Los Angeles, she met top Hollywood children talent agencies, and she started landing roles in films and televisions shows.

In 2013, Millie Bobby Brown made her acting debut in the drama ‘Once Upon a Time in Wonderland.’ She portrayed her talent so well that she got a role in the thriller ‘Intruders.’ She also starred in sitcoms such as ‘Modern Family,’ ‘NCIS’ and ‘Grey’s Anatomy’ among others. She became popular and famous where she starred in the drama ‘Stranger Things’ as Eleven. Her role in the drama made her very famous and portrayed that she could handle any role put to her. The drama was a hit as Rotten Tomatoes rated it at ninety five percent.

Millie Bobby Brown hates shopping, but she has appeared on the cover of magazines such as ‘So It Goes’ and ‘Interview Magazine.’ She is down to earth, and she never thought that she would become so famous in such a short period. Her elder brother manages her Twitter Account. Her elder sister, on the other hand, manages her Instagram account.

Millie Bobby Brown has a supportive family as her family moved from Florida to Los Angeles to support her acting career. She is hardworking and committed to all that she does. She is still young, but she has a bright future ahead of her. When she is not on the screen, she loves spending time with her family. She loves Sunday Roast Dinner followed by a film. She is a football fan, and she supports Liverpool FC.