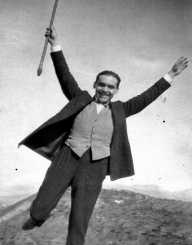 Federico del Sagrado Corazón de Jesús García Lorca known in short as Federico Garcia Lorca was a Spanish poet, theatre director, and playwright. Born on June 5, 1898, she gained international fame as a figure of the Generation of’27, a group mainly made of poets who traits of European movements including futurism, symbolism, and surrealism to the Spanish literature. Federico Garcia Lorca was executed during the Spanish Civil War by Nationalist forces, and his body was never found. An enquiry into his death was opened in 200, and the family later agreed to the excavation of a potential gravesite near Alfacar. However, his body was not found there.

Federico Garcia Lorca was born on June 5, 1898, to Federico Garcia Rodriguez and Vicenta Lorca Romero in Fuente Vaqueros in Southern Spain. The family moved to Valderrubio in 1905 and then to the capital of Granada in 1909 when Garcia was eleven years. There, they lived in the family summer home, Huerta de San Vicente, in the outskirt of Granada. Their homes in Fuente Vaqueros, Valderrubio, and the Huerta de San Vicente have all been converted into museums.

Federico Garcia Lorca started receiving piano lessons under Antonio Segura Mesa, a harmony teacher in the local conservatory and a composer when was eleven years. Noticing his potentials, Mesa, advised him to pursue music at the professional level. Federico Garcia Lorca graduated from secondary school in 1915 and enrolled at the University of Granada. While there, he studied law, literature and composition. However, he was drawn closer to music than literature.

Federico Garcia Lorca drew inspiration from the scores of Claude Debussy, Ludwig van Beethoven, and Frederic Chopin. It was not until 1916 when his music teacher Segura died that he started his literary career. Even with that, Federico Garcia Lorca debut prose like Nocturne", "Ballade" and "Sonata where drew from musical forms. Federico Garcia Lorca embarked on a trip with his university professor through Castile, Leon, and Galicia, in 1916 and 1917. It was during this trip that the professor influenced the writing of his first book, Impresiones y Paisajes (Impressions and Landscapes), which was published in 1918 with monetary support from his father. In 1919, he moved Residencia de Estudiantes in Madrid.

Federico Garcia Lorca wrote his debut play, The Butterfly’s Evil Spell on the request of Sierra from 1919 to 1920. With the help of his brother Francisco in 1921, Federico Garcia Lorca published his first book of poems, which consisted of a collection of his work from 1918. Federico Garcia Lorca joined the composer, Manuel de Falla in Granada in 1922. This was to promote the festival, Concurso de Canta Jondo, dedicated to improving flamenco performance.

All the plays were against the bourgeois Spanish Society. It also questioned the accepted role played by women in the society exploring the taboo issues of homoeroticism and class. In 1934, the new rightist government cut by half subsidy meant for La Barraca and the last time it performed was in April 1936. Among his works written totally or in parts before his assignation includes When Five Years Pass (Así quepasencinco años), 1931, Blood Wedding (1932), Yerma (1934) and Diván del Tamarit from 1931 to 1936.

Federico Garcia Lorca became a target during the rise of the right ring for his socialist views. Granada became a dangerous town with no mayor, and anyone who tried to pick that post was killed. García Lorca brother-in-law, Manuel Fernández-Montesinos, who agreed to pick the position, was assassinated within a week. On August 18, 1936, the Nationalist militia arrested García Lorca and is believed he was assassinated the following day. In Ian Gibson’s book The Assassination of García Lorca, Federico Garcia Lorca alleged that García Lorca was killed along with three others, Dióscoro Galindo González, Joaquín Arcollas Cabezas and Francisco Galadí Melgar. According to the book, the assassination took place at Fuente Grande ('Great Spring'), a road between Viznar and Alfacar.

However, according to police reports, released by Cadena Ser in April 2015, says fascist forces were behind the assassination of  Federico Garcia Lorca. A report released during the Franco-era on July 9, 1965, described Federico Garcia Lorca as “socialist” and “Freemason belonging to the Alhambra Lodge,” who engaged in “homosexual and abnormal practices.” His site of burial is known up to date. There have been several attempts to excavate in search of his remains, but all have proved futile. In 2016, an associate professor in Spanish literature at Nottingham University, Stephen Roberts, alleged that García Lorca was buried in a well in Alfacar, but that could not be substantiated.