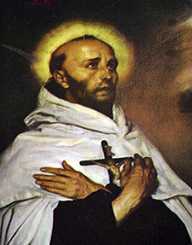 Juan de Yepes y Alvarez was born in Fontiveros, Avila, Spain in 1542. His father Gonzalo was from a wealthy family. His family disowned him when he married a poor orphan girl. Consequently, John grew up in an impoverished family. He was born into a family of descendants of Jewish converts to Christianity. John persevered a problematic and challenging childhood.

He lost his father while he was still somewhat young and this exposed his family to hardships. All alone, his mother, Catalina strived to raise her children. A couple of years later, another tragedy happened in the family when John’s brothers died of apparent malnourishment. His mother struggled to raise her remaining children.

They moved to Medina del Campo. She was able to find a weaving job. John studied at a school for poor children. Here he studied Christian doctrine. He also served as the acolyte at a nearby monastery of Augustinian nuns.

From 1559 to 1563, John studied humanities at a Jesuit school. He also got a job at a hospital. In1563, he made his way to and became a member of the Carmelite Order. There, he adopted the name John of St. Matthias.

In 1564, St. John of the Cross declared his religious vows as a Carmelite. He moved to Salamanca where he studied theology and philosophy at the university there. In 1567, his turning point came with his ordination as a priest.

At first, he wanted to enter the strict Carthusian Order. It was an order that attracted him because of its encouragement of solitary and silent contemplation. Nevertheless, in September 1567 after a visit to Medina Del Campo, he decided to do otherwise.

As at 1567, the Carmelite nun Teresa of Jesus was also in Medina to establish the second convent for women. When they met, she informed him of his plans to restore the purity of the Carmelite Order. She wanted to restart the observance of its “Primitive Rule” of 1209 which had become lenient under Pope Eugene IV in 1432.

Teresa encouraged him to work together with her in the restoration. Consequently, he joined Teresa after completion of his studies. In August 1568, they traveled together from Medina to Valladolid. In Valladolid, Teresa planned to found another monastery of nuns. John discovered more about the form of Carmelite life with Teresa.

In October 1570, John established a new community at Pastrana. He also found a community at Alcala de Henares which was to be a house of studies for the Academic training of the friars.

Teresa asked him to come to Avila in 1572. He was elevated to the position of a spiritual director, and he combined this with the role of a confessor for Teresa. She was at that time the prioress of the Monastery of the Visitation.

In 1574, John and Teresa were at Segovia to establish a new monastery there. After that, John immediately returned to Avila.

However, the transformations that Teresa and John started had caused conflicts among the Spanish Carmelite friars. John was abducted from his residence in Avila on the night of December 2, 1577. It was attributed to a group of Carmelites who are in opposition to the spew of reforms. He was imprisoned in a Carmelite monastery in Toledo. At that time, the Toledo’s monastery was the Carmelite Order’s most important in Castile.

John of the Cross was kept in isolation inside a small, unventilated cell measuring ten by six feet. He endured this under harsh treatment. He was subjected to regular physical torture. For at least once every week, John was lashed before the community.

His physical condition had greatly deteriorated during this time. He was deprived of food and not even given clothes to change. John the Cross kept an unwavering faith. At these difficult conditions, he devoted himself to authoring poems.

John of the Cross succeeded in a prison break in 1578 and on August 15 to be exact, by prying open the cell door. The several weeks that followed became the opportunity for him to get nursed back to health. As soon as he was physically able, John again became active in the reform. He attended a meeting of the supporters of reform at Almodovar Del Campo in October 1578. He was appointed superior of El Calvario.

He was appointed the rector of a new college in 1579, at the Colegio de San Basilio. This was to support the studies of discalced friars in Andalusia. He was at this posting until the year 1582. John the Cross became prior at the friars’ monastery of Los Martires and also at Alhambra in March 1582.

Even after the death of Teresa, John of the Cross continued the reform. In 1585, he founded a monastery of Discalced nuns in Malaga. He was elected Provincial Vicar of Andalusia in the same year. He traveled widely while serving here. He established seven new monasteries in the region. He returned to Castile as prior of the house of Segovia and as a councilor of the provincial.

John of the Cross was a famous mystic and a Carmelite friar. He was the founder of the Discalced Carmelites along with Saint Teresa of Avila.

He studied humanities at a Jesuit School when he grew up. Then later he entered the Carmelite Order. He adopted the name John of Saint Matthias on his journey to becoming a priest. The revered saint, Teresa of Avila a well-known mystic asked his help in restoring the Carmelite life into its original observance of austerity. Together they founded the Discalced Carmelites. Saint John holds a vital role in Spanish literature as a poet.

John of the Cross wrote several excellent poems during his imprisonment. His poems are “Cantico Espiritual’ (The Spiritual Canticle), ‘Noche Oscuradel Alma’ (The Dark Night of the Soul) and ‘Llama de Amor viva’ (The living flame of Love). His best-known work is the ‘Noche Oscura’

The poem is a powerful narrative of the path by which the soul sheds its attachment to everything. Accordingly, the soul ultimately passes through a personal experience of Christ Crucifixion to his glory.

Saint John of the Cross died on December 14, 1591, due to erysipelas but the Holy See did not forget him. In 1726, he was canonized and declared a Doctor of the Church.