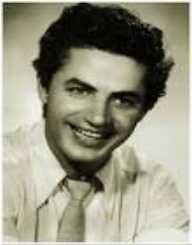 Antonio Molina was a Spanish film actor, dancer, and singer of the traditional Flamenco and Flemish dances.

Antonio Molina was born as Antonio Molina de Oses Castillo Hidalgo on March 9, 1928, in the Spanish city of Malaga. He grew up in the rural villages of Totalan in a friendly extended family. He spent most of his time herding livestock and delivering milk to the local market.

He discovered his passion for music and resolved to move to the Spanish capital Madrid for a professional career. He tried several times to escape to Madrid. All these times, he was returned home by the Spanish civilian police due to his age.

Antonio Molina got employed at a local bar hoping to save funds from financing his traveling expenses to Madrid. He got into an affair with his female employer. Molina eloped with his employer to Madrid. He lived with his mistress until he got a job at a local tapestry factory. He soon left the factory to join the military. He served his mandatory period in the army and was discharged. He separated from his mistress upon his return.

He returned and settled in Madrid. He started frequenting local bars playing traditional Spanish music. He met and became friends with Flamenco artist Jose Maria Puchol. Molina learned the basics of music from the Granada singer. With the help of Puchol, Molina wrote his first four songs.

In 1949, Antonio Molina entered a radio musical radio contest sponsored by the Radio Spain. Molina won the talent competition and decided to record his earlier four songs. He added more songs and recorded his first album with the help of Puchol.

In 1952, Antonio Molina made his first appearance as a professional artist in Madrid. He performed at the Fuencarral Theater. He became an instant prodigy of the traditional Flamenco singing and dance. His songs got played regularly on Spanish radio stations. He continued playing in several events in and around the capital.

He graduated from performing in invitational events to creating his show in 1954. He called his show Hechizo and started performing at the Calderon Theater in Madrid. In his career, he wrote and recorded over 150 songs. It is foolhardy to categorize the songs since they got good public reception in the musical world.

One of his songs Soy Minero became the national anthem of the Flamenco music lovers in Madrid. Some of his other songs include I Want to be a Matador, Malaga Girlfriend, Cordoba and his Couplet, and Barcelona. His humble rural beginnings inspired most of his songs in Malaga. They resonated well with the low-income earners in Madrid. They talked about the daily struggles of life and exalted the virtues of honesty and hard work.

Antonio Molina tried his hand in the film industry. He appeared in his first film in 1948 titled The Young Cantor. He resumed his acting in the 1950s. He starred in the movie El Macetero in 1952. Molina cast in two films in 1953. The movie The Fisherman of Couplets and The Young Miner preceded the 1954 film I am a Miner. In 1955, he featured in three films titled That Voice is a Mine, La Saeta and The Piyayo.

He followed up with another triple appearance in 1956 in the films Malaguena, The Daughter of Juan Simon, and Missionary Cantor. Molina did his last triple cast in the year 1957. He started with the film titled Before the image of Christ.

He cast in his second film the Christ of the Lanterns and finished the year with the film, The Child of the Lanterns. He did several other films until his last appearance in the 1987 film production titled Andalusian Girl.

Antonio Molina returned to the music scene in 1986 after almost a decade of absence. He performed in local bars in Madrid for a while. Unfortunately, his bid to revive his musical career failed to materialize. In 1990, he was honored with a Platinum Disc by the Spanish music regulators. He became one of the few Flamenco artists to break into the Platinum Disc recognition tables.

In 1951, Antonio Molina married Angela Tejedor in Madrid. The couple had eight children and stayed together until his death. Some of his children notably Angela, Miguel, Monica, and Noel became singers in their adulthood. The rest like Antonio, Juan Ramon, Jose Alberto, and Paula chose different professions.

Molina battled with ill health from 1989 when doctors found he was suffering from a lung condition called cystic fibrosis. He succumbed to the disease on March 18, 1992, in Madrid at the age of 64. He was buried in the Fuencarral Cemetery, in the neighborhood where he started his musical career.

A bust statue of Antonio Molina stands in the central square in the city of Malaga since 2002. In his hometown of Totalan, another statue was unveiled in 2017 in his honor.

Despite his death, his influence on the traditional southern Spanish music lives through most of his prodigies who carried on his genre of fused music.