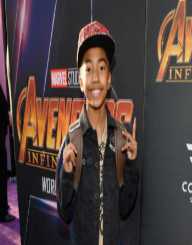 The pure truth of life is that we tend to become the biggest fans of children who play critical roles either in movies or television series. Be it as a protagonist or an antagonist; we will get ourselves immense in respect for the young talent who could play the beautiful roles. Well, Miles Brown is not an exception as he is not only talented but famous for his natural flair for Hip-Hop dance. Known around the nation for his skills and ability to make the world turn. He is already in the process of making a star for himself if he is not already a role model to others.

Miles Brown is usually applauded for his numerous ability to fit in any character he is offered to act as. Is that not a pure talent? Well, if you are an ardent audience of sitcoms, you would not be new to Black-ish a TV show. In fact, he is always at the top of every person’s list of favorite child actors. He is on his path to being the finest actor as well as a dancer that the world will ever witness. He is, in fact, going to go places if he does not relent.

Can you imagine a three-year-old child impressing people with his exceptional hip-hop dance moves? Well, Miles Brown, being an exceptional child, impressed people and made their hearts jump for him while he was that age. This dance of his then became his stepping stone to his fame in a career. He became well sought after, and people are looking forward to seeing him impress them. He got invited to join Yo Gabba Gabba, a TV show, by a friend. It was through that that the whiz kid has the opportunity of showcasing his talents to the world.

Miles Brown eventually got wider audience and fans after then. His career kept moving at a very geometric rate. It was later that he discovered that he could act as well. This ability of him to act further gave him the opportunity of having wider fans. His love for acting as well as working in different roles helped him achieve his stance in the show business. He had performed in so many television shows including Shameless and Raising Hope. He is always alive whenever he gets himself work up on the screen showcasing his skill. He, however, had his breakthrough during the popular TV show Black-ish when he floored the producers with his exceptional acting skills during the audition.

The biggest goal of Miles is to pursue his career to the top. Miles Brown always wants to climb the ladder of success higher and higher. To him, there is no reason for him to stop in a bid to impact and inspire the generation. He also always wants to make people have the belief in themselves that they can do what they think they cannot do naturally.


THE SPECIALTY IN MILES BROWN

Miles Brown is a very humble fellow that is known for being able to laugh at life’s absurdities. His on-screen family so much adores him that he choose to be optimistic in all his life. He is known for his confidence and the aura of humility that he carries alongside with him wherever he goes. He is so much and popularly known as having an uncanny resemblance to the famous Michael Jackson. Unsurprisingly, he mimics Michael’s dance moves. His great and spectacular moves and abilities made him enter the semis of America’s Got Talent and even stunned the audience with his crazy dance moves. He is, in fact, the combination of both dance and acting.

Miles Brown is known for being capable of doing justice to both knotty and highly critical roles he plays. One thing is that the people could not get much of his simplicity to put up a hypothesis about him. However, his popularity has been increasing so greatly geometrically with the Ellen Show. He later became part of the Emanon team in 2009 where he had to show his dance skills and ability.

Miles Brown was born to Cyndee and Wild Child on the 28th day of December 2004. His dad is a rapper and his greatest support system. He is known as Baby Boogaloo by his fans. Although his dream was to act and dance, he would love to join NBA if there is a chance for him. He is so much in love with Lebron James.