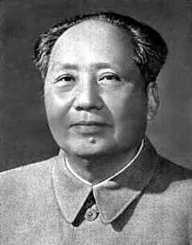 Mao Tse-tung was a Chinese soldier, scholar, and statesman who led the Marxist revolution and created the modern day Communist republic.

Mao Tse-tung was born in Hunan province, China in December 1893. He studied basic education and started working at the age of 13. He left his village to pursue higher education in the Changsha, Hunan’s capital. He graduated from high school and stayed back in the capital. He studied the history of great revolutions in the world.

In October 1911, local rebels waged war against the Chinese Qing dynasty. The insurrection spread from Wuchang to Changsa. Mao joined the revolutionary army and served for six months in the military. The revolution ended in 1912 when the emperor was dethroned and a new Chinese republic instituted. He went back to school and graduated at the First Provincial Normal School in 1918. He enrolled at the Peking University in Beijing.

He worked as a librarian in the university, meeting different Chinese cultures and political ideologies. He witnessed the student demonstration during the May 4th Movement in 1919. The students demonstrated against the ceding of the Shandong province to Japan instead of China. The province was occupied by Germany. Mao met Chinese revolutionists who propagated the Marxism over Western capitalism. He became attracted to the political movement led by student leadership.

In 1919, Mao returned to Hunan and organized the middle-class workers to demonstrate against the Japanese. In his several appeals, Mao referred to the success of the Bolsheviks in Russia two years earlier. Though outspoken against capitalism, Mao was not akin to the Marxist ideology.

In the late months of 1920, Mao organized the formation of the Hunan Socialist Youth League. In July 1921, the Chinese Communist Party held its first congress meeting. Mao attended the meeting. In 1912, the Communists merged with the Nationalist Party. He gradually worked his way up the party leadership. He organized the peasants into a network of politically conscious movement. His actions were noticed by the Hunan governor.

Mao fled from Hunan after being profiled an instigator of violence. He settled in Guangzhou. He edited the Nationalist Party journal as the propaganda leader. He was assigned to head the Peasant Movement Training Institute in 1926. Chiang Kai-shek, the Nationalist leader became wary of the communist elements within the party. He purged the top ranking Communists serving within the Nationalist Party. Kai-shek allied himself to the Chinese feudal lords and waged war against the Chinese Communist Party or CCP. In October 1927 Mao organized a peasant revolution aided by his former Peasant Institute students in Hunan province. He initiated an armed insurgency against the Nationalists in the Chinese civil war. The Communists under Mao took power from the Nationalists in Beijing. Chiang Kai-shek fled to Taiwan and declared sovereignty from mainland China.

On October 1, 1949, Mao became the Chairman of the People’s Republic of China. He entered into a partnership with Stalin’s Soviet Union. The Soviets gradually embraced Mao, whom they earlier treated with suspicion. He signed a five-year economic pact with the Soviets in 1953.

On the domestic front, Mao abandoned the peasant led movement. Mao opposed the industrialization of the Chinese factories. He argued that the Cultural Revolution would inspire the masses to industrialize. He organized and empowered the rural cooperatives formations in China. In the process, Mao instilled in the population elements of Chinese patriotism, as envisaged in the revolution goals. He forced the city elites to embrace the Stalin based commune system.

In May 1958, Mao declared the Great Leap Forward. He stated that with patriotism and hard work, China would leap over the industrialized countries. Mao established larger communes to replace the peasant cooperatives. The communes operated without resources leading to constant rebellions from the poor. The rich and educated elite took over power and resources from the rural peasants. The communes experienced massive corruption from the city elite. Mao faced criticism from the rank and file of his party. He purged and executed most of the dissenting voices.

In 1963, Mao fell out of favor in Soviet circles. The leaping strategy backfired on many fronts. China faced a famine with no food. The Soviets left abandoning unfinished projects, and dissenting voices in the party were growing. Mao introduced the Cultural Revolution. The revolution was to instill patriotism and inspire allegiance to the CCP and Mao. He used the revolution to stem out the dissenting voices as traitors of the Chinese. Most of the rebelling politicians were killed or sent to rural labor camps to die.

Mao transformed China into a recognized industrial, economic and military power in less than two decades. He created a system of collective governance and classless society. His abrasive style pacified most feudal lords into submission. China became a nation with a single administrative system.

Mao was a hero and despot in one package. The Chinese nationalists praise him for eradicating the class-based society. He raised the nationalistic pride of the Chinese through economic growth. He brought a sense of collective governance.

To his critics, Mao is a cruel dictator who annihilated rural villages and killed dissenting voices under the disguise of the Cultural Revolution.