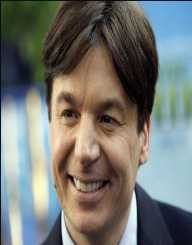 Michael John Myers was born on May 25, 1963, in Scarborough, Toronto. His parents were both from Liverpool, United Kingdom. His father was an insurance agent, and his mother an office supervisor and a veteran of the Royal Air Force. He also has two older brothers.

Myers began his on-screen career at a very early age. He first performed in commercials when he was two years old. At the age of ten, he appeared in the British Columbia Hydro commercial and later made guest appearances on TV series King of Kensington. After finishing high school, he began focusing on his acting career. He joined the Second City Canadian touring company and moved to the United Kingdom. In 1985, he became one of the founders of The Comedy Store Players- an improvisational group at the London’s The Comedy Store.

In 1986, Myers got a role on the British children’s TV program Wide Awake Club. The same year, he moved back to Toronto with Second City Theatre as a cast member. In 1987, Myers moved to Chicago. He also worked on the Second City theatre and worked as a performer and teacher at the Improv Olympic. In the early 1980s, Myers developed the Wayne Campbell character. As this character he appeared in the video show City Limits, Toronto’s summer series It’s Only Rock & Roll. As Wayne, he also appeared in the Kurt and Dieter sketch with Dana Andersen, which later turned into the Saturday Night Live famous sketch Sprockets.

In 1992, Myers and his producer Dana Carvey created the motion picture Wayne’s World, based on the famous Saturday Night Live sketch. The movie became one of the most successful projects of the year and the following year, a sequel Wayne’s World 2 was released. He also starred in So I Married an Axe Murderer.

Myers took a break from the film industry, only to return in 1997 with Austin Powers: International Man of Mystery. The movie was a big hit and was followed by sequels Austin Powers: The Spy Who Shagged Me and Austin Powers in Goldmember. Myers portrayed both lead roles- Austin Powers and Dr. Evil, as well as several other characters.

One of the rare non-comedy roles for Myers was in the film 54: Steve Rubell. The movie portrayed the life of New York City’s famous Studio 54 proprietor. Although the film was not a commercial success, Myers performance was critically acclaimed. In 2009, he also starred in a minor role in Quentin Tarantino’s InglouriousBasterds.

Myers' voice became widely recognized after he took the role of Shrek in the DreamWorks animated film. Myers voiced all four Shrek movies, theme park ride Shrek 4-D and the Christmas special Shrek The Halls. He has also tried out his talent in producing with the 2008 movie The Love Guru. In 2013, Myers made his directorial debut with the film Supermensch: The Legend of Shep Gordon.

Myers has been voted amongst the top 50 comedians in The Comedian’s Comedian poll. In 2007, he received the MTV Generation Award.

Myers has a variety of hobbies. He is a player of Dungeons & Dragons and has even participated in the Worldwide Dungeons & Dragons Game Day. He is also a major fan and supporter of Toronto Maple Leafs hockey team. He is often spotted at the games and gives interviews to the local press about his thoughts on the games. He has also played for the celebrity soccer team Hollywood United FC. In 2016, he published a widely popular book, Canada. The book tells the story of Canada and what makes it great in a comic way. The book became an instant best-seller in Canada.