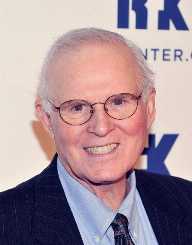 American film and television actor and radio personality-cum-author, Charles Grodin was born on April 21, 1935, in Pittsburgh, Pennsylvania, the United States of America as Charles Grodinsky. He hailed from an orthodox Jewish family. His father Theodore I. Grodin used to earn his livelihood by selling wholesale supplies. His mother Lena worked in the family store and also nursed the disabled veterans voluntarily. She had a Russian ancestry and his father had immigrated to America. Grodin was the second son of his parents. He had an elder brother named Jack. He received his education attending the University of Miami. However, he abandoned his studies midway and went on to pursue acting without completing his graduation.


CAREER BEGINNINGS AS AN ACTOR

Upon dropping out of the University of Miami, he studied acting under the tutelage of renowned theatre personality Uta Hagen and Lee Strasberg. His first appearance in a film was an uncredited small part in the 1954 sci-fi film ‘20,000 Leagues under the Sea’, a Disney production. He made his Broadway debut in a 1959 play titled ‘Tchin-Tchin’. He made his film debut duly credited in the 1964 American comedy film ‘Sex and the College Girl’, where he showed his comedic talent with his wry sense of humor and deadpan wit.

Throughout the second part of the 1960s, he played several small roles. Among these, his portrayal of an obstetrician in the 1968 film ‘Rosemary's Baby’ stood out tall among others. It was the central character of the horror film which showed his true class as an actor. In another of his memorable appearances, he played the character of Matt Stevens in the ‘Young Marrieds’, a soap opera by television giant ABC.

Apart from acting, he went into direction and screenplay writing during the late 1960s. He co-wrote and directed a Broadway play titled ‘Hooray! It's a Glorious Day...and All That’ during this period and also directed some other Broadway plays including ‘Thieves’ and ‘Lovers and Other Strangers’.

In a career spanning almost one and a half decade, he got his first big break when he landed the lead role in the 1972 film ‘The Heartbreak Kid’. His characterization of a sporting goods salesman who abandons his wife on their honeymoon received rich accolades. Eventually, these performances as an actor catapulted him to the status of one of the leading comedians of his generation.

During the 1990s, Grodin appeared as George Newton, an anxious family man in the kid’s comedy ‘Beethoven’ (1992). It was a very different kind of role played by him. He subsequently reprised the role of this box office hit film in its 1993 sequel ‘Beethoven's 2nd’.

He hosted a television talk show named ‘The Charles Grodin Show’.  The show was aired on CNBC TV from 1995 to 1998, where he had the liberty to choose the topic of the show. Grodin became a political commentator from 2000 onwards in a program called ‘60 Minutes II’. He wrote the screenplay of an Off-Broadway Play named ‘The Right Kind of People’ in 1984. The production dealt with the cooperative boards in some areas of the New York City.

He authored his autobiographical work “It Would Be So Nice If You Weren't Here” and published it in 1988. He authored some more literary works including ‘How I Got To Be Whoever It Is I Am’, ‘If I Only Knew Then’, ‘I Like It Better When You're Funny’, ‘Just When I Thought I'd Heard Everything’, ‘How I Get Through Life’, ‘Freddie the Fly’ and ‘We’re Ready For You, Mr. Grodin’.

Charles Grodin married Julia Ferguson and they together had a daughter before their eventual divorce in 1968. He tied the nuptial knot for the second time in July 1983 when he married Elissa Durwood. The couple was blessed with a son. He abandoned his fledgling acting career in the 2000s for a short while to take care of his two children.