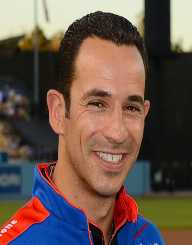 Helio Castroneves was born on May 10th, in 1975. He is famous for being a Brazilian car racer. Earlier on, Castroneves contested in the IndyCar Series where he won 23 times with 38 poles.

Aside from this, he has also participated in the CART championship. In 2001 and 2002, he recorded wins in the Indianapolis 500. He also emerged the winner in the competition in 2009. With three wins under his name for the race, this earned him immense fame.

Helio Castroneves was born on May 10th, in 1975. His birthplace was in Sao Paulo, Brazil. With a particular interest in racing, he kicked off his racing career in karting. After some time, he went ahead and joined the Paul Steward Racing crew. In 1995, he was ranked third in the British Formula 3 Championship.

Castroneves racing skills caught the interest of Emerson Fittipaldi, an Indianapolis 500 winner. As a result, Fittipaldi strived to ensure that his fellow Brazilian car racer earned himself an opportunity to compete at the Championship Auto Racing Teams (CART) in 1998. After performing well in some races, Castroneves signed a racing contract with an IndyCar team called Penske Racing.

Helio Castroneves was regarded as an exceptional racer. As a result, fans nicknamed him “Spider-Man.” This nickname also stemmed from his style of celebration. However, in spite of his excellent performance, he never emerged the winner in the championship.

Besides earning a name for himself in racing, Helio Castroneves has also garnered profound fame in the television industry. He emerged the winner in the fifth season of the TV dance show called Dancing with the Stars.

His dancing partner in the competition was Julianne Hough. Similarly, on truTV, he appeared in the show called The Smoking Gun Presents World's Dumbest.

Later on, Castroneves also competed in the fifteenth season of Dancing with the Stars. During this period, his dancing partner was Chelsie Hightower. Unfortunately, they were eliminated in the early stages of the competition.

On October 3rd, 2008, Helio Castroneves faced some charges with regards to tax evasion. However, he denied the allegations. Castroneves’ siblings also went through legal troubles as they faced accusations of collaborating to hide money in offshore accounts.

Helio Castroneves wife is called Adriana Henao. The two have a daughter together. They welcomed they were first born in 2009.